Amazing Irish dancers take to the streets of Detroit (VIDEO)

Dancers from the Flanagan-O’Hare School of Irish Dance step and hop their way around Detroit to highlight the city’s revitalization. 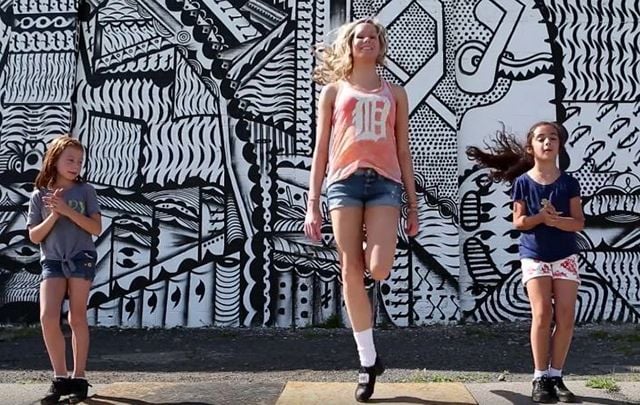 Dancers from the Flanagan-O’Hare School of Irish Dance step and hop their way around Detroit to highlight the city’s revitalization. Flanagan O'Hare School / YouTube

These Irish dancers want you to know that Detroit is on the path towards revitalization. Dancers from the Flanagan-O’Hare school of Irish Dance worked on a positively awesome video last summer, displaying their dancing skills in some of their city’s most vibrant and iconic locations, set to the tune of Justin Timberlake’s “Can’t Stop the Feeling.”

As Michael O’Hare, who founded and runs the school with his wife, Elaine Flanagan O’Hare, told IrishCentral, “The video was inspired by our school being invited to dance at a surprise birthday party for Matt CullPrincipalipal, Rock Venture, LLC, CEO of Jack Entertainment LLC, and part founder of Dan Gilbert’s Family of Companies. Upon arrival at his party, we received a tour of the Quicken Loan building and realized the efforts to revitalize Detroit were well underway and we had so much to be proud of in our city.

“Our dancers were thrilled to be part of his celebration and wanted to return to Detroit to highlight  Irish dancing at some of the well-known places within the city.  Our school thoroughly enjoyed making the video and have so much to be proud of being raised as Irish Americans living in Detroit and the surrounding suburbs.”

The Flanagan-O’Hare School was founded by Michael O’Hare TCRG in 1981. Classes are currently held in Bloomfield Hills, MI as well as Naples, FL.  The school has received worldwide recognition for their students, who have won All Ireland Championships, National Championships, Mid America Championships as well as numerous local feisanna. Past lead dancers in both "Riverdance" and "Lord of the Dance," born and raised in the suburbs of Detroit, also got their starts at the school.

Michael O’Hare and his wife Elaine Flanagan-O’Hare are both certified Irish dance teachers with the Commission Le Gaelacha, Dubliln, Ireland. They thoroughly enjoy teaching students of all ages the art of Irish dance.

Additional information about the school can be obtained from their website at www.irishdancemichigan.com and www.irishdanceflorida.com.