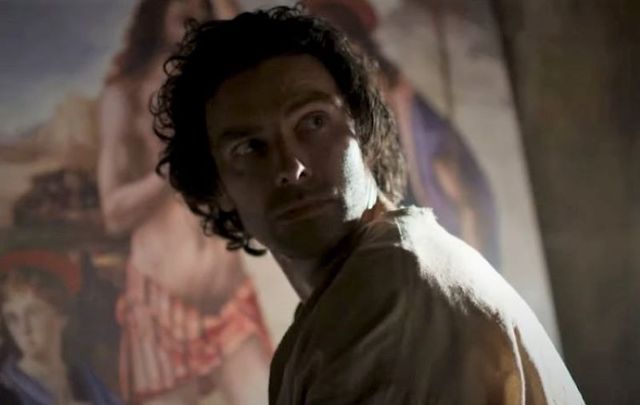 Aidan Turner is set to make his return to television in "Leonardo" after wrapping up "Poldark." Lux Vide, Instagram

The first glimpse of Aidan Turner in "Leonardo" shows the Irish actor as da Vinci learning his craft as a young apprentice.

The drama explores da Vinci's time as an apprentice in Andrea del Verrocchio's workshop in Florence and also chronicles his career as one of the world's most renowned artists.

The new "Leonardo" teaser first aired on April 15, the birth date of the famous Italian artist, and serves to whet the appetite for next year's show:

Today is the birth anniversary of the Italian genius #LeonardoDaVinci. We wanted to celebrate it with an exclusive first look of @_aidanturner as #Leonardo, in the new upcoming production by #LuxVide, #RaiFiction, @big.light.productions and #SonyPicturesTelevision #LeonardoTheSeries.

The series was created by Frank Spotnitz, who previously worked on "The X-Files," and Steve Thompson, who worked on the contemporary Sherlock Holmes drama "Sherlock."

The series is directed by Daniel Percival and Alexis Sweet.

The production marks a return to television for Turner, who hasn't featured in a television production since he starred as Poldark in the eponymous BBC drama.

Poldark was set in Cornwall, England, just after the American War of Independence and received widespread critical acclaim.

We can't wait to see how the Dublin-born actor adapts to the role of one of history's most famous and charismatic figures.

Here's a little behind the scenes of #Leonardotheseries - we’re very excited to bring this show to you all of you soon! @_aidanturner and writer Steve Thompson at the table reads. #Rai #SonyPicturesTelevision #FranceTV #RTVE #Repost @big.light.productions with @get_repost ・・・ We wanted to give you a little sneak peek of #Leonardotheseries - we’re very excited to share this story with all of you soon. Check out a couple of pictures from our table read with the production team. #stephenthompson #danpercival #filmmaking #setlife #seriesevent #italy #art #leonaedodavinci #leonardo #aidanturnerfans #mcm

Read more: Could Irishman Aidan Turner be the next James Bond?