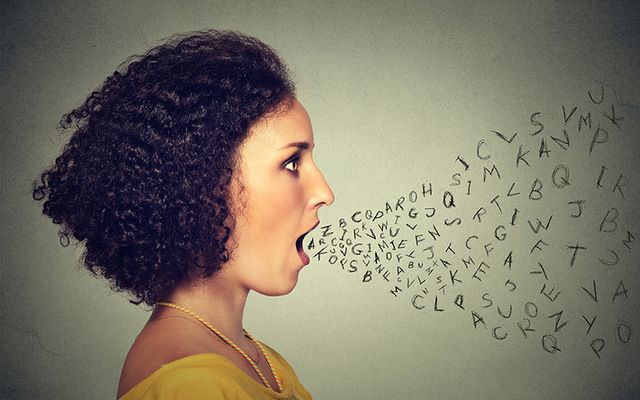 The English language has Ireland and Irish to thank for these common words. iStock

Ireland has given a lot to America, and this includes some contributions to the way in which we speak.

While those people who aren’t massive fans of the Irish language will always complain that Irish takes too much from English for modern Irish-language words, the development of both languages should be looked at as more of a word swap, as there are plenty of English words that have their basis in Irish or in Ireland.

Here are nine examples of English words with Irish roots:

This may surprise you but, according to Upworthy, slogan comes from a combination of the words “slua” and “gairm”. “Slua” is the Irish for a crowd and “gairm” can refer to a calling or a profession. The site claims that some mixture of “Sluaghairm” is the basis of the word.

This one is a little easier to explain. “Go leor” is the Irish phrase for 'there was a lot of something' and is pronounced exactly the same as the relatively new English word “galore.” The word even takes advantage of Irish-language phrasing – in English, we generally describe the quantity before the noun (there was a lot of rain), in Irish it almost always comes after the noun. Except with galore. In English we’d say “there was water galore” and in Irish we’d say “Bhí uisce go leor ann”, galore/go leor coming after water/uisce in each case.

Smithereens has its roots in the word “smiodar” meaning “debris.” A common feature of the Irish language is to add “ín” to the end of a word to express a smaller version of the original word. It’s because of this that you may meet a father named Séan who will have a son named Seáinín. As both of them are named Seán, “ín” was added to the end of the son’s name to tell the rest of the world that he is the younger version and to put an end to any confusion when they’re being called to do something around the house.

Funnily enough, we often use “smidiríní” in Irish now which sounds significantly more like the English.

Another one that is very easily explained. “Clann” with two n’s instead of one is the Irish for a family. It may have lost an “n” along the way, but its meaning is still exactly the same.

According to Upworthy, swanky comes from the word “sócmhainní,” which can be translated as any money that’s available to a person to clear off a debt. It may also have its roots in the word “somhaoineach” meaning “profitable/valuable”.

You may be wondering how on earth “swanky” with a “w” could possibly be linked to a word that includes “mh” in its stead and the answer again is pretty simple. In the Irish-language alphabet, there is no “w” or “v” and so “mh” is used to make the “w” or “v” sound depending on how the word is spelled. If an “mh” is followed/preceded by an a, o, or u (known as the broad vowels) then it makes a “w” sound. If it is followed/preceded by an e or i (known as the slender vowels), then it makes a “v” sound.

“Fuisce” or “uisce bheatha” (meaning the water of life) is the Irish for whiskey. While the English word has evolved quite a bit from these versions, the basic “shh” sound in the middle and the ending is still there.

Coming from “caoineadh,” which means “lament,” and exactly what the tradition of keening involves. While the spelling is remarkably different, the sounds are almost the same. “Caoineadh” would normally be pronounced as “kween-ah”.

Keening is an old Irish tradition. Up until the middle of the last century, keeners could often be heard at an Irish wake. Keeners were women who would often be paid with a glass of whiskey to vocalize the grief of the family through wails and cries while gathered around the deceased's body in the family home.

An ancient tradition, keeners could mourn over the body for days, but thanks to the power of the Catholic Church, the tradition died out in Ireland in the 1950s. The powers that be in the Irish Church deemed the practice, often regarded as a pagan ritual, as inappropriate and families began to fear that to engage in keening at their family member’s wake would make them appear backward or as part of a backward-thinking culture.

“Bog” in Irish means “soft,” and in Hiberno-English bog, as in the Bog of Allen, is a soft, wet area of land made up of peat. These soft peat bogs cover a sixth of Ireland and for centuries turf has been cut from them to heat homes and, in the 20th century, as a fuel for electric power stations.

The bogs were formed after the last Ice Age as centuries and centuries of decomposed animal remains and dead plant material accumulated on top of each other undisturbed. The wet weather in Ireland during this time, when the country was completely covered in forest, caused the minerals to soak down and form an impermeable layer which further rainwater could not soak through. As a result, the peat formed in the water-soaked land.

The term boycott comes from a form of protest first implemented in Ireland during the Land War in the 1850s, 60s, and 70s. Poor Irish tenant farmers were locked in a battle to win themselves better rights, to lower rents and to be given greater chances to become owners of their properties.

In one of the Land War’s most high profile cases (which was not technically a war but a prolonged period of civil unrest) tenants ostracized Captain Charles Boycott, the land agent of an absentee landlord, Lord Erne, who owned tenant farms in Co. Mayo. When Boycott attempted to evict eleven families from their homes, he found Lord Erne’s fields empty of workers and his house staff refusing to work.

While the practice had been exercised many times before this, the land agent’s name stuck and he will now forever be infamously linked to the form of protest.

Do you know of any other common English words linked to Irish? Let us know about them in the comments section.