Newest service providing robot has already demonstrated its applications in a retirement community, in Washington DC, and Trinity engineers believe their robot will be market ready by 2021 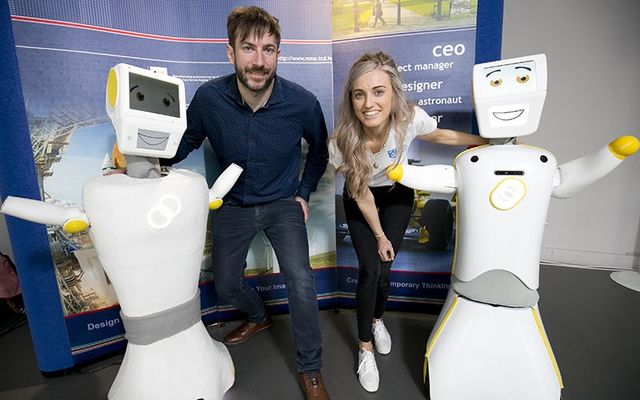 Trinity College Dublin: Dr Conor McGinn, Stevie I, a member of the engineering team behind the creation and the new Stevie II. Fennell Photography

The robot, designed and created in Dublin demonstrated some of his applications recently evaluated during a pilot with the Army Distaff Foundation, a non-profit organization that built, owns and operates Knollwood Military Retirement Community, in Washington DC. At a private showing in the Science Gallery, Dublin,  on Wednesday morning engineers also highlighted key technical enhancements, as well as new artificial intelligence capabilities.

During their three-week trip to the US, the Trinity team along with the staff at Army Distaff Foundation began testing the technology with residents and staff at the facility.

Could we all be using these assisted living robots, from Dublin, after 2021? What do you think? Read more here - http://bit.ly/30nq1gX

Commenting on the findings of a recent pilot, which took place in February/March this year, Associate Executive Director, Matt Reilly, said:

“The research conducted over the past year with our partners from Trinity College Dublin is very promising and has significant potential for allowing us to incorporate this technology into our care delivery systems across the continuum of aging.

Whether deployed in independent living, assisted living, or skilled nursing, social assistance robotics platforms such as Stevie, driven by sophisticated AI, become tools that can help our care staff increase their performance and improve care outcomes. We are truly excited to be on the forefront of employing this technology.”

Over the coming months, the team is planning several more pilots of the technology, including an extended deployment at Knollwood and a trial in the UK, where Stevie will be tested in long-term care facilities in the Cornwall region as part of the European-funded EPIC project. The team is aiming for the first permanent deployment of the technology to occur sometime in 2020.

Stevie II is the successor to Stevie, a prototype assistance robot who took the country by storm in 2017. Stevie won thousands of admirers and served as a proof of concept that a socially assistive robot could be deployed in long-term care environments to help seniors and people living with a disability. Stevie II, meanwhile, builds on those successes but embodies significant technological upgrades and advanced AI capabilities. 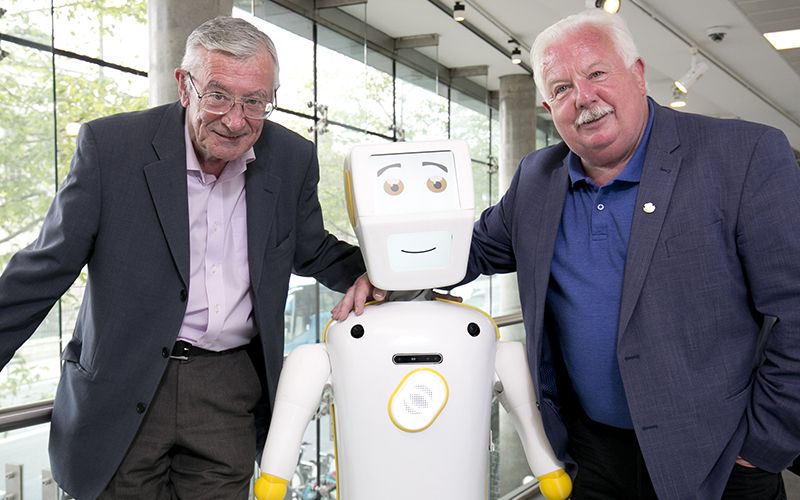 Active members of the ALONE community and Stevie II.

Stevie II is considerably more mobile and dextrous and uses advanced sensing technologies including laser rangefinders, depth cameras, as well as tactile, inertial and vision sensors to interact intelligently with its environment. Meanwhile, wireless connectivity (wifi, Bluetooth, etc.) and a series of onboard computers diversify its potential uses. In addition to performing new functional tasks, the robot has been given enhanced expressive capabilities.

“We found from interviews and focus groups that seniors enjoyed interacting with Stevie. It being so expressive helped to humanize the technology in a way that surpassed our expectations. These insights lead us to believe that a robot like Stevie can have a wide range of high-impact uses, which may involve performing numerous assistive tasks, helping caregivers, and may even provide new interfaces to existing technologies – like video calling, smart sensors, social media – that can be inaccessible to many older adults.”

The Trinity team consulted with a wide range of experts during the robot’s development, including nurses and caregivers, as well as older adults living at home or in long-term care facilities. Among those partners is ALONE, a national organization that supports older people to age at home. ALONE currently provides and uses technology to support older people to remain independent and socially connected.

CEO of Alone, Seán Moynihan, said: “ALONE has been delighted to partner with Trinity and to see how Stevie has developed since we first met in 2017. Often there is an assumption that older people and technology don’t mix, but the response to Stevie from the older people we work with shows that this is simply not the case. We hope that innovative solutions like those provided by Stevie and also by ourselves in ALONE through our BConnect technology will be utilized to ensure older people across the country can access the best support available.”

What do you think? Are robots the future of health and personal care? Let us know your thoughts in the comment section below.

Read more: Why Trinity College is the most memorable place to stay in Dublin