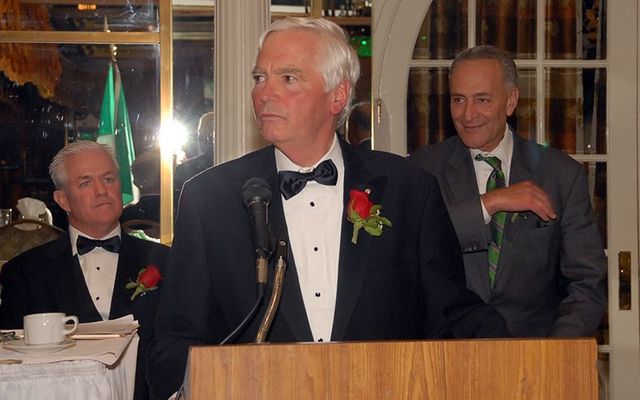 Dr. Brian O’Dwyer will deliver the 2022 Irish Studies International Lecture on the subject, ‘Irish America from the Troubles to Brexit: A Sleeping Giant Awakes' on Tuesday 7 June.

A son of Irish immigrants, Dr. Brian O’Dwyer has been especially influential and active in America's Irish community, focusing on immigration rights and reform as well as supporting investment and development throughout Ireland as chair of the Irish Chamber of Commerce, USA.

In 2019 he was Grand Marshall of the New York City St. Patrick’s Day Parade. He has long been involved with the Democratic Party and was a founding member of the National Democratic Ethnic Coordinating Committee and of Irish American Democrats. He presently serves as Counsel to O’Dwyer and Bernstien, LLC.

He was part of the delegation that accompanied President Bill Clinton to Ireland on each of his three trips and served as an advisor to the White House on Irish issues including the peace process.

In June 2011, Secretary of State Hillary Clinton appointed him as Commissioner of the United States National Commission for UNESCO. He has served as International Chair of Ireland West Airport and holds Honorary Degrees from DCU (D.Phil) and Middlebury College (DHL).

O'Dwyer has been chosen by Irish America magazine on numerous occasions as a member of the ‘Top 100’ Irish in the United States. In June 2012, O'Dwyer was honored as one of the top 25 Irish who has made a difference by Irish Voice Magazine. The award recognized him as one of the top leaders of the Irish Community in the New York area, and as someone who has had a significant positive impact in changing the community.

The lecture is free and open to the public and will be held in the Emeleus Lecture Theatre at Queens University Belfast on 7 June at 5 pm. Registration is required via Eventbrite.