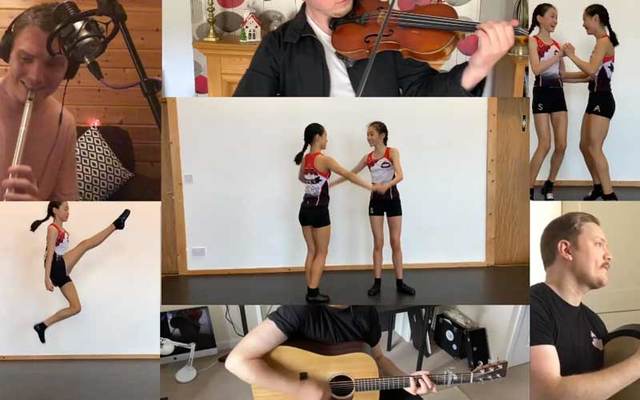 Sisters Ailbhe Liu and Seoda Wang, whose parents immigrated to Ireland from China, are students of the McNelis Cunningham Boyle School of Irish Dancing in Donegal Town, reports Donegal Live.

Read More: WATCH: This 89-year-old has been teaching Irish dancing in Australia for 75 years

The talented sisters are the latest dancers to work with Dingle native Geaney, who has been producing a video series of dance collaborations since the COVID-19 lockdown began.

In his successful video series, Geaney collaborates with dancers from around the globe, including many multi World Championship winners. The video with the sisters is his 16th collaboration.

When posting the video of the sisters to his Facebook page, Geaney, said: "Dare I say it, this might be my favourite!"

🔥 Collab No. 16 - Ailbhe Liu & Seoda Wang 🔥 Dare I say it, this might be my favourite!🙊😍 Ailbhe Liu & Seoda Wang, who's parents are originally from China, now live in Donegal and they're are probably the most natural dancers I've seen in a long time!🙌 The passion these kids, and their parents have, for Irish culture is unbelievable! 😍 Joined by Ali M. Levack on whistle, the current BBC Young Trad Musician of the Year and co-founder of the incredible Project Smok who's album we took this from! 🔥 On bodhrán, Mr Adam Brown from the amazing bands RURA and Ímar! 🙌 Adam also produces incredible bodhrans so if you want one get in touch with him! 🙌 Returning again are two of my favourites, Benedict Morris & Charlie Galloway for another lash of tunes!🔥 To Pablo Lafuente who done an incredible job mixing this, thank you!🙌 Lastly huge shout out to Paula Mc Nelis-Monaghan from the Mc Nelis Cunningham Boyle School! She came to me a few weeks ago with an idea after seeing one of my first collabs and pretty much choreographed the entire routine! It's underrated how talented you are and it was amazing to work with you and the girls on this! 😍❤️ Folks, what about this for an array of talent!? 😍🔥 And yes, this edit took me over 13 hours straight! 😂 But it was so worth it! ❤️ The Irish Post IrishCentral.com As Irish as it gets Music: Headlifter by Project Smok (Isolation Version😂)

He goes on to describe the sisters as the most natural dancers he has seen in long time, adding "The passion these kids, and their parents have, for Irish culture is unbelievable!"

The music in the video is Headlifter by Project Smok. The whistle is played by Project Smok co-founder Ali M Levack, who is also the current BBC Young Trad Musician of the Year. The bodhrán is played by Adam Brown, from bands RURA and Ímar. Musicians Benedict Morris and Charlie Galloway are also featured in the video. The video was mixed by Pablo Lafuente.

The dance routine was choreographed by Paula Mc Nelis-Monaghan from the Mc Nelis Cunningham Boyle School.

In his post, Geaney thanks the choreographer, saying: “It's underrated how talented you are and it was amazing to work with you and the girls on this.”

David Geaney is a 5X World Champion Dancer, who has performed all over the world. He took part in “Britain’s Got Talent” in 2017, reaching the semi finals, and in 2018 brought his Irish dance show "Velocity" to New York.

According to his website, he also regularly performs in his family’s bar, The Dingle Pub, in Dingle, County Kerry.