Travel from Kilkenny to the Ukraine to Antartica without ever leaving the medieval city, all as part of the magnificent Kilkenny Arts Festival. 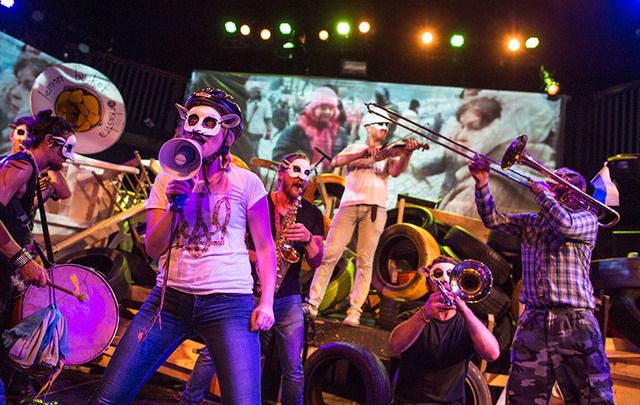 With shows everywhere from the incredible Kilkenny Castle to an old brewery, Kilkenny Arts Festival turns the old medieval town into a hub of creativity for ten days in August

Entering the medieval town turned modern Irish city of Kilkenny over the ten days of the Kilkenny Arts Festival is to prepare yourself for a fleeting journey around the world. Enter a local livestock mart to time travel to the 2013/2014 Ukrainian Revolution; step inside the Brewhouse to experience the chills and shivers of Antarctica; or venture into the historic Parade Tower in Kilkenny Castle to plunge yourself into the middle of Brexit talks and the discussion on the future relationship between the UK and the EU.

Already established as one of Europe’s finest artistic celebrations bringing world-class performances to Ireland’s medieval city each summer, the Kilkenny Arts Festival, founded in 1974, runs this year from August 11 to August 20, offering up the city’s historic churches, castle, courtyards, townhouses and gardens as the magical setting for visitors and locals to tap into their creativity.

“Ireland and Europe are in a moment of immense change.  We’re excited to present premieres this year across a kaleidoscope of artistic forms that stretch our experience of art and performance, as well as our ideas about our nation and our continent,” said KAF director Eugene Downes of this year’s festival.

“In particular, I can’t wait for Irish audiences to experience the exhilarating energy of Counting Sheep, which creates an unforgettable 360-degree experience of the Ukrainian revolution – or our ten-day immersion in the timeless late masterpieces of Schubert, which take us on an emotional and spiritual journey to transcendent inner worlds. Each day is packed with unique events and artistic encounters in Ireland’s medieval city.”

The following is a spotlight on just some of the stand-out performances, events, and experiences as well as a look at what is still to come in the last few days of the festival before it ends on Sunday, August 20. Were you at KAF this year? Let us know what you got up to in the comment section, or share your photos with us via social media.

It’s an old cliché that the arts and creativity can transport you to another place or time, but the incredible immersive experience of “Counting Sheep” does this like no other, placing the audience slap bang in the middle of the Ukrainian revolution on Maidan Square in 2013-14 and allowing them to feel to feel the anger, excitement, and joy of the first days of the revolution.

One of the most acclaimed hits of the 2016 Edinburgh Fringe Festival, “Counting Sheep” is making its Irish premiere in Kilkenny. The show's organizers are asking their Irish patrons to sit at their table – quite literally – as they eat, sing and dance to Ukrainian music and song in this explosive immersive theater experience.

Created by musicians Mark and Marichka Marczyk with Balkan-klezmer-punk band the Lemon Bucket Orkestra,  “Counting Sheep” – so called because “all revolutions look, from the back, like a sheep movement,” according to Marichka – has already presented three shows to Kilkenny audiences, who, in turn, have proclaimed that it’s nothing like they’ve ever experienced before.

“I’ve never been at something like it before. It was absolutely atmospheric, including the food, the movements, the masks, absolutely everything,” said one audience member, who clearly chose to avail of the fully immersive experience that provides some food, as well as including some standing and participation, instead of the tiered fully-seated option.

“Suddenly I’m in the middle of this and it’s unfolding in front of me.

“Counting Sheep” continues today and tomorrow with an 8 pm performance as well as two additional performances on August 19 at 3 pm and 8 pm.

As part of the government-led Creative Ireland initiative taking place across Ireland, “Ireland and Europe: Creative Visions” this week brought together leading artists and public figures from Western, Central and Eastern Europe, to share creative visions and imagine possible futures for Ireland, Europe, and the world in the face of the rapidly changing global political landscape. It’s a time of huge change for Ireland, Britain, and Europe, as Brexit and the Trump Administration create huge uncertainty, the momentum for EU integration returns, populism regroups, and conflict continues on the Eastern frontier with Russia.

This highly interesting series of talks and conversations has already heard from Mark and Marichka Marczyk, the creators of “Counting Sheep”, on “Ukraine: The New European Frontier,” while other forums have heard from the former Czech Minister for Europe Alexander Vondra; John Major’s Ambassador to the EU and Tony Blair’s top European adviser, Sir Stephen Wall; and celebrated Irish architects Sheila O’Donnell and John Tuomy, a conversation which was streamed live (see below).

Speakers still to appear in the series include one of Ireland’s iconic cultural voices Iarla Ó Lionáird as well as Secretary General of the Department of Public Expenditure and Reform, Robert Watt.

“Raven Eyed”, a stunning new circus theater show by Loosysmokes (Elaine McCague and Jonah McGreevy), made its world premiere this week. "Raven Eyed," which will turn your world upside down, is being staged at the historic Brewhouse, the former Smithwick's brewery in Kilkenny.

As “Counting Sheep” pushes the boundaries in terms of audience immersion and transporting spectators into the action, so does “Raven Eyed” with it capacity for bringing the audience into a turbulent dreamscape where superstition meets the surreal, using a spectacular blend of gravity-defying aerial work and audio-visuals that explore the boundary between the past and the present, the real and the imagined.

Loosysmokes was the firm favorite with the Kilkenny Arts Festival crowd last year performing “Behind the Dark,” a deeply eerie, strikingly beautiful fusion of dance and acrobatics. We can anticipate a repeat with “Raven Eyed” this year and audiences are sure to be talking about it for months to come.

The show runs every night until August 19.

Did you know that the famous Handel’s “Messiah” received its world premiere in Ireland? Kilkenny Arts Festival celebrated the 275th anniversary of the famous composer’s time in Ireland, returning “Messiah” to the land of its premiere as part of a festival-long series of events named “Mr. Handel’s Adventures in Ireland.”

Partnering with the acclaimed Irish bassoonist, harpsichordist and conductor Peter Whelan and his baroque orchestra, Ensemble Marsyas, KAF this week presented a three-concert residency that told this remarkable story: “The Arrival of Mr. Handel,” “Mr Handel at the Keyboard” and the original 1742 Dublin version of “Messiah.”

The festival hasn’t completely revolved around classical music, however, as a further Creative Ireland-supported event “Secret Garden Music” is offering up a range of artists in pop-up performances twice daily. Now in its fourth year, you can drop down to any of these free performances in one of Kilkenny’s loveliest secluded gardens to hear from leading Irish and international artists such as Martin Hayes.

While some of these previous events may seem a little much for the young children in your life, that doesn’t mean that you should leave them at home if you wish to enjoy Kilkenny Arts Festival, as there’s just as much creative space around for the little ones as there is for the adults.

What better place to hear from international and Irish storytellers than in “Yurt in the Yard” in the iconic Kilkenny Castle Yard? Bring the kids along to the castle throughout the remainder of the week to set their imaginations alive in this incredible setting.

A specific creative space for children, Creative Ireland-supported “Yurt in the Yard” is hosting the storytellers Niall de Búrca and Helena Byrne in sessions covering everything from the fairy folk to riddles.

While at the castle, it would be a crime not to lose yourself in the Luminarium, a stalwart installation at the Kilkenny Arts Festival. A luminarium is a monumental walk-in sculpture which is designed to allow people be moved by a sense of wonder at the beauty of light and color while they explore all the nooks and crannies.

The breathtaking inflatable luminarium created by Architects of the Air has become a favorite over the past few years at the festival and so, to mark its 25th birthday, they decided to try something new. “Albesila” features all the elements that make its luminaria so popular with young and old alike: a magnificent central dome filled with stars, vibrant primary colors and ever-changing light effects. But while other luminaria encourage you to get lost, “Albesila” boasts spectacular sight-lines that enable you to see right along the structure’s length.

“Albesila” remains open from 11 am until 6 pm every day until Sunday, August 20.

Another of world premier at the Kilkenny Arts Festival’s this week took us to some of the coldest places on Earth, with the powerful multimedia work “Antartica” which brought us into the freezing temperatures of the pole with its music and visuals.

A completely sold out show, “Antarctica” featured in the first few days of the festival, wowing with its enthralling dialogue between past and future.

Created by Linda Buckley, David Power and John Comiskey, the work drew inspiration from early expeditions to the South Pole and built on last year’s “Uilleann Goes Electric” to create this year’s staged performance, which featured a combination of Buckley’s hypnotic electronic score with live uilleann pipes from David Power in an environment of evocative projected imagery.

Also featured last Monday was Yiyun Li, a Chinese American writer, writing in English, who has been hailed as one of the most original fiction writers of our time.

Taking to the Parade Tower, she talked to Cormac Kinsella about her new memoir, “Dear Friend, from My Life I Write to You in Your Life“ which mixes the literary and the personal to dazzling effect and explores everything from her time in the People’s Liberation Army to her decision to renounce her native tongue.

Were you at KAF this year? Let us know what you got up to in the comment section, or share your photos with us via social media.