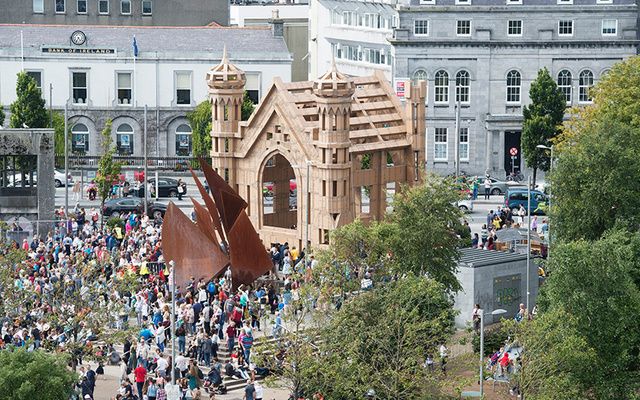 Imagine a city where for two summer weeks artists of all fields and mediums from all corners of the world gather to put on over 200 different events for a rapt and excited audience that is nearly three-times the city’s regular population. Music fills the air at venues, bars and on street corners. Plays, readings and talks are staged all over and galleries are full of diverse talent. Installations transform the cityscape; dancers, acrobats and entertainers parade through the streets.

This is Galway City for two weeks every July. Now in its 40th year, the Galway International Arts Festival is one of the foremost international arts events in all of Europe. This year’s festival – the in its 40 years – began on July 17 and runs through this weekend, wrapping up on July 30. It’s on track to break the 200,000 attendance barrier again this year, generating a $27.5 million (€23.5 million) economic impact on the city.

Festival Director Paul Fahy and Anne Clarke at the opening of Woyzeck in Winter.

This year's festival has drawn a record number of volunteers, nearly 600. As reported by Nik Quaife, an Irish Communications Consultant based in both the US and Ireland who’s spending some time in Galway (where his mother's family is from), there are a number of US programmers represented, including Susan Feldman and Erik Wallin from St. Ann’s Warehouse in Brooklyn and Aidan Connolly and Rachael Gilkey from the Irish Arts Center in Manhattan.

The following is a spotlight on just some of the stand-out performances, events and experiences. Were you at GIAF this year? Let us know what you got up to in the comment section, or share your photos with us via social media.

A new addition to GIAF this year is the First Thought talks program, supported by the government-led Creative Ireland initiative, which brings some of the best minds and thought leaders across genres and fields of the arts to Galway to discuss their crafts and creativity. Guests have included: Marwa Al-Sabouni, a Syrian Architect who came from Homs to talk about her recent "The Battle for Home," which explores the role architecture and the built environment play in whether a community crumbles or stays together. The book offers insight on how her country, Syria, should be rebuilt.

Authors Anne Enright, Joe O’Connor and Roddy Doyle discussed the power of silence, refugee activist and writer Fintan Drury talked about borders, and Colm Tóibín spoke on power’s effect on the individual. Emma Rice, most recently artistic director of Shakespeare’s Globe’s in London, discussed the sheer power of theater, and US cartoonist Tom Tomorrow talked about the impact of political cartoons.

This summer marked the festival’s largest-ever theater program, with 14 shows. They include "Bathroom," the fourth in a series by renowned Irish playwright Enda Walsh; a production of "Tristan and Yseult" by Kneehigh, directed by the acclaimed Emma Rice; "Two Pints," a staged version of the Roddy Doyle Facebook series; "Woyzeck in Winter," which had its world premiere at GIAF, and "Driftwood" from the contemporary Australian circus group Casus Circus.

"The Second Violinist," an opera by same team that presented the opera "The Last Hotel" in 2016, received its world premiere in Galway. "The Second Violinist" is a major achievement for contemporary opera in Ireland. With a chorus of 16 and an orchestra of 14, together with principals, music staff, creative, production and technical staff, it will require a company of 56 people to bring it to the stage. In addition to its world premiere in Galway, the production will play at the Dublin Theater Festival in October, and further international dates are to be announced.

There has been something for everyone in Galway when it comes to music, as there always is at GIAF. The Grammy Award-winning Ladysmith Black Mambazo group from South Africa; Brian Wilson of the Beach Boys; Contemporary Irish rock dynamos The Coronas, folk goddess Lisa Hannigan, the best of classic American music with RTE’s Night at the Proms; the Sierra Leonean and Irish classical, jazz, pop miracle Loah, and much more.

There were premieres of works by Irish visual artists John Gerrard, Brazilian artist Ana Maria Pacheco’s tough and politically influenced solo exhibition, John Beard’s large-scale works, the Impressions exhibition for emerging artists, and Nicola Gunwhy’s health-influenced exhibition. There has been so much to see.

This might just be the most fun and spectacular part of GIAF. Spectacles, installations and utter magic in the streets of Galway. This year there’s been the interactive architectural event 'The People Build' by the French artist Olivier Grossetête, the Chariot of the Sea street show, and the futuristing i-Puppets taking over the streets this weekend.