These great Irish songs instantly become the worst ones to sing if you're trying to claw together the lyrics on St Patrick's Day. 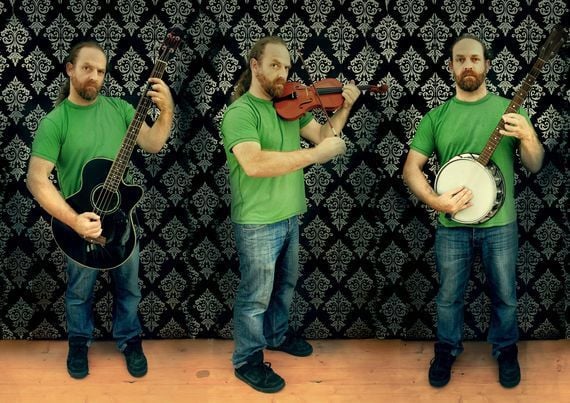 We don't care if you're a toddler or an adult, all of these great Irish songs instantly become the worst ones to sing if you're trying to claw together the lyrics on St Patrick's Day.

If your buddy feels compelled to sing the lyrics of a famous Irish ballad this Saint Patrick’s Day, be a good friend and make sure he or she removes the following ten numbers from their party piece list.

In their right, these songs are all classics but on St. Patrick's Day especially they can be overplayed and overdone and should be saved for other more rare occasions when you get a sing-song going during the year. If you think there are any others we should add to the list, let us know about them in the comments section, below.

She Moved Thro’ The Fair

This old Irish melody with words written by turn-of-the-century poet Padraic Colum is, they say, a hauntingly beautiful love song. But what’s it about? Although the young girl has died, she comes to her sweetheart in a dream and says, “It will not be long, love, till our wedding day.”

Have a think about this. You’ve seen it somewhere before. It was a movie by Tim Burton called "Corpse Bride." It’s amazing how few people actually pay attention to what they’re hearing. Some people think this song is majestic and otherworldly, we say it’s creepier than a bookcase full of Stephen King novels.

This one is favored by the 2 am-brigade. It’s a recitation of every major invading horde to pillage Ireland from the Vikings down to Cromwell. Listening to it, you’ll feel that you’ve lived through all of that history personally. There are quite a few verses and not much joy in sight.

This song rhymes ‘freedom’ with ‘three men.’ That’s sufficiently criminal to get it mentioned here but there’s more to this dusty old clunker than that. Written in the early to mid-1840s in Ireland (just before the outbreak of the great famine) this song has actually been inciting riots for hundreds of years. In the Beatles' movie "A Hard Day's Night," Paul’s grandfather begins singing it at the British police officers after they arrest him for peddling autographed pictures of the lads. What does that tell you?

Low lie the Fields of Athenry and low will lie your spirits by the time the singer gets through this buffoonery. It’s the middle of the great famine and Michael has been caught stealing food to feed his starving family. Prison ships and destitution await young lovers. Are there any Irish ballads that conclude with a happy ending?

What is this song actually about? Who thought – really, who - that a fishmonger would make a really compelling subject for a song? It isn’t true, as Sinead O’Connor discovered to her cost on perhaps the worst record of her entire career, the tuneless debacle called Sean Nós Nua. No matter where it is sung, Molly Malone will always seem to be echoing from someplace far away (in the very distant past) when things were, in fact, worse for everyone, not better.

It’s probably not a good idea to sing this one anywhere, ever. Here’s the opening verse:

“Wee Willie John McFadyean was a loyal Orange Prod,_
And he thought that Ian Paisley was just one step down from God_
He thought they ate the childer in the backwoods of Ardoyne,_
And he knew that history started with the Battle of the Boyne…”

Yes, yes, old reliable. There’s a school of thought that suggests the lyrics to this song can be discovered in Irish people’s DNA. Don’t you believe it. The lyrics were actually written by – of all things – an Englishman in 1910. Did that burst your bubble?

What do we know about the song Danny Boy? Well, we know that it has the power to bring the wildest party to a total standstill. It can reduce the most stoic Irishman to heaving sobs. It empties saloons, it breaks hearts and it ruins evenings. For the love of God tell your buddy to forgo it this year.

The Homes Of Donegal

This song has a horrendous tempo and the lyrics redefine witless. It’s all about a traveling tramp buttering up the credulous locals with creamy compliments to ensure he has free meals and a bed for the night. Only in Donegal would they still fall for that.

The Mountains of Mourne

They should have spelled it mountains of ‘mourn.’ It would have been more truthful. This is a song about an Irish immigrant in London who’s homesick and who – it must be said – is disgusted by the hordes of loose London women who, apparently, go topless when they go out. He advises his listeners in Ireland not to do the same. Right you are, and let's have a different tune while we at it, eh?

Only the Irish can fill a love song with so much impending dread and sorrow that you’ll suspect the happy young couple will soon be gunned down or dispatched before the singer reaches the first chorus. So it is with The Flower Of Magherally, a love song filled with so much menace that you’re teeth will be chattering after the first line.

Have we missed any Irish songs you like to avoid on St. Patrick's Day? Let us know in the comments section.