A group of Turkish shopkeepers gets more than they bargained for when they take on a solitary Irish tourist. 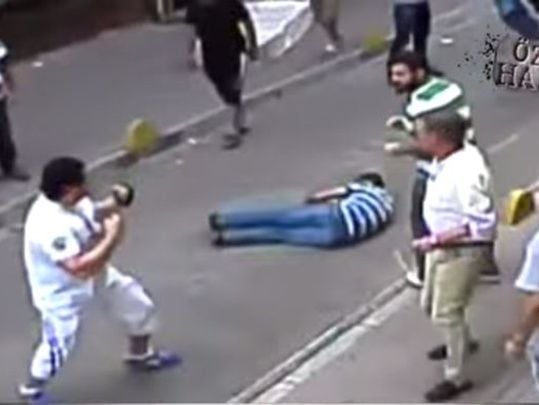 A group of Turkish shopkeepers get more than they bargained for when they take on a solitary Irish tourist. YouTube/Enine Boyuna

In an amazing show of sporting prowess and plucky determination, this Irish tourist was allegedly forced to take a break from enjoying his vacation to defend himself from a group of angry Turkish shopkeepers.

Taking on the group of men single-handedly, he holds his own, proving true the saying “You’ll never beat the Irish.”

The mass brawl began in the Istanbul neighborhood of Aksaray when the man, described by Turkish media as an Irishman and an alleged “professional boxer,” accidentally knocked over a fridge filled with bottled water. In a severe over-reaction to the tourist's mistake, the shopkeeper proceeds to attack the man with a stick in punishment for his clumsy blunder and is joined by neighboring shopkeepers in his attack.

Not happy to take the abuse lying down, the man stands his ground, knocking a man straight to the ground at one point in the CCTV footage. Such is his enthusiasm to protect himself that he eventually has to be calmed down and led away once the shopkeepers accept defeat.

Read more: Catholic Irish soldiers too drunk to fight at Battle of the Boyne

Fantastic! #Irishman takes on 12 Turkish shopkeepers in a brawl. Many Turks now love him! http://t.co/TrxL94xnUr pic.twitter.com/krYqqsvv1y”

The alleged Irishman became something of an unexpected hero in Turkey since the video was released. Not only has the Irish fighter become the country’s ultimate underdog but he has become a surprising symbol of the division in Turkey between the progressive left and the conservative government.

Shopkeepers are generally supporters of the current government and were involved in attacks on protesters during an anti-government protest in 2013. Anti-government social media users have hailed the Irishman as one of their own for fighting them off.

This is one case where the stereotype of the fighting Irish comes out to help a man in need. Hasn’t Liam Neeson made enough "Taken" films by now to show the rest of the world that you should never mess with an Irishman, even if you do outnumber him ten to one?