WATCH: This family of Irish trad musicians will blow you away

The Maguires are an incredible young family band from Co. Wicklow who will wow you with their musical talents. 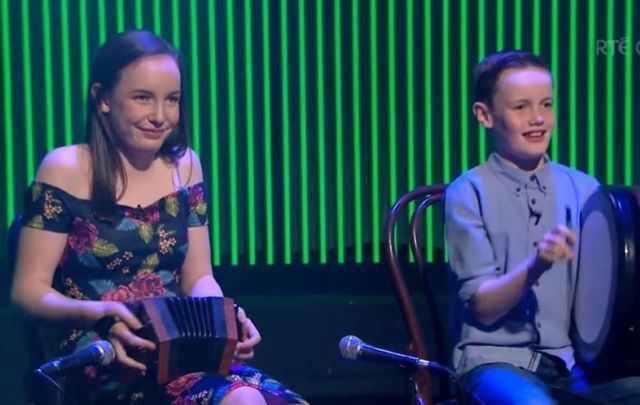 Aoife and Sean Maguire giving it socks on RTE's Ray D'Arcy Show in 2016 The Maguires, YouTube

The Maguires, a four-piece family band from Co Wicklow made up of Emma Maguire (fiddle, flute, concertina, piano), Aoife Maguire (concertina, uilleann pipes), Seán Maguire (bodhrán) and Philip Maguire (guitar), have been on the go for more than three years now impressing audiences with their unmatchable talents.

In December 2016, The Maguires released their debut traditional Irish music album 'Little Giants and Other Oxymorons.' On it, the band members wrote six of the eleven tracks.

The Maguires have earned themselves admirers across the globe after featuring on The Ray D'Arcy Show in Ireland to an estimated half a million viewers in May 2016:

Read More: The only traditional Irish music playlist to get you through a Monday

The below video was taken as The Maguires released their debut album at the Temple Bar Trad Fest. Emma, Aoife, and Philip Maguire joke and smile as Seán warms up the crowd for their grand entrance:

While Seán is a fantastic player in his own right, the rest of the Maguires are no slouches themselves. Be sure to stay until the end of the video to see what the rest of the family can do. The reaction from the crowd at the end says it all. Among the talented acts at the annual Temple Bar Trad Fest, these young musicians stand out.

You can find out more about The Maguires on their website or on Facebook. Little Giants and Other Oxymorons is available on CD from their website or for download from iTunes, Google Play, and CD Baby.

What's your favorite traditional Irish music group? Let us know in the comments!