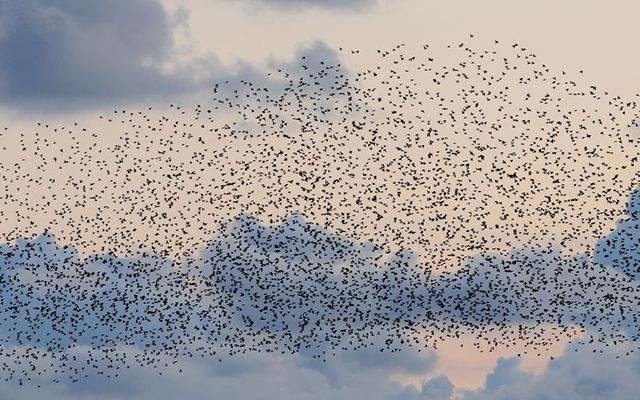 This murmuration (flock of starlings) recorded in Ireland has gone viral. Get a glimpse of this amazing phenomenon, shot behind Lackagh church, in Galway.

Facebook user Donna Naughton Kemp uploaded this video on Jan 19, 2014, saying she could have stayed there all evening watching the birds, and who could blame her.

Speaking to the Irish Mirror she said, “I was after visiting someone in hospital on Sunday and I was on my way home when I saw this spectacular performance of starlings in the sky.”

What she recorded was thousands of starlings battling for survival. During murmuration the birds swirl and loop about in the sky and battle to determine the weakest of the flock and who is a target for predators, or so experts believe. However, it’s not certain what is really behind this amazing ballet in motion.

Two other videos of murmurations recorded in Ireland have also gone viral. The first was in 2011 when two tourists canoeing across the River Shannon to a small island were taken aback by the birds in flight. The next was recorded in 2013 by Birdwatch Ireland, in County Wexford.

“Starlings gathering together at a roost site in one of nature's most amazing spectacles, a murmuration. And what makes it even more amazing is that no-one really understands why they perform these amazing aerobatics.”

Back in 2009, Daniel Butler wrote in the Daily Telegraph that murmurations take place when “Each bird strives to fly as close to its neighbors as possible, instantly copying any changes in speed or direction. As a result, tiny deviations by one bird are magnified and distorted by those surrounding it, creating rippling, swirling patterns.”

He wrote that these amazing movements were a fight for survival.

“Starlings are tasty morsels for peregrines, merlins, and sparrowhawks. The answer is to seek safety in numbers, gathering in flocks and with every bird trying to avoid the edge where adept predators can sometimes snatch a victim.”

Whatever these movements are they’re truly spectacular and the experts do agree that they usually take place, just before dark, when the birds are looking for a place to rest.

Here’s the video from Galway taken by Dave Connaughton: