Cork boy Micheál Óg Dwan-Fogarty's sliotar disappeared into the River Lee six months ago, but has since washed up in South Wales, more than 300 kilometers away! 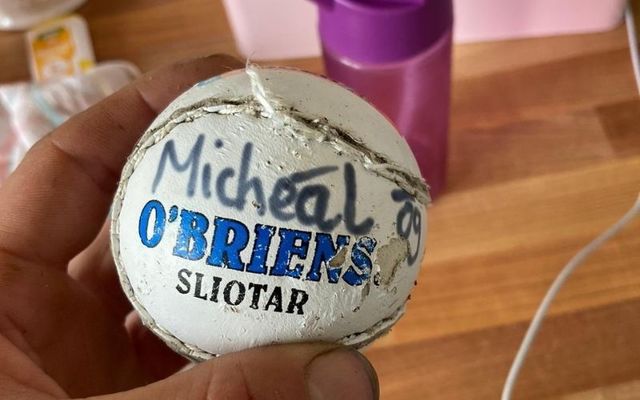 A sliotar belonging to a ten-year-old boy in Cork that went missing six months ago has turned up on the south coast of Wales having traveled hundreds of kilometers across the Irish Sea.

Micheál Óg Dwan-Fogarty was practicing his skills on the banks of the River Lee in Cork six months ago when he accidentally sent the sliotar into the water.

Half a year later, Darren Acteson found the ball on Cefn Sidan beach and took to social media in the hope of locating its owner.

A long shot but does anyone know Michael Dwan Fogarty 🇮🇪??,we found his Hurling ball while fishing,washed up on Cefn Sidan beach which is between Burry Port and Kidwelly in South Wales🏴󠁧󠁢󠁷󠁬󠁳󠁿 pic.twitter.com/peGqPHiiSI

Acteson hoped to return the sliotar to Micheál, who had scribbled his name across the ball.

"We found it out walking on Cefn Sidan beach at night and it caught our eye because we didn't know what kind of a ball it was, my mate took it home for the dogs, it was only the next day he saw the name written on it and we realized it was a Hurling ball," Acteson told Cork Beo.

Within 15 hours, Micheál's father had confirmed that the sliotar belonged to his son.

Micheál Fogarty Sr., a prominent member of Douglas GAA club in Cork, said that his son was delighted to hear that his sliotar had been found more than 300 kilometers away.

"About six months ago we were down by the marina in Blackrock when Micheál pucked the ball into the River Lee. I said “Sure it’ll turn up somewhere”, but we have so many sliotars in the house that it was soon forgotten about. I was sent the photo this morning and there was no question that it belonged to my son," he told Extra.ie.

Acteson said that he frequently visits Belfast and that he may travel down to Cork during his next visit to present Micheál with his long-lost sliotar.

Fogarty Sr. said that he would present Acteson with a Douglas GAA jersey and a sliotar if he makes the journey.

"I wouldn’t mind letting Darren keep it as a memento, but when he does come over I’ll be sure to give him a sliotar and a Douglas GAA jersey as a gift," he said.