Fancy owning your own Irish pub, including wheels and a thatched roof? Get your orders in. 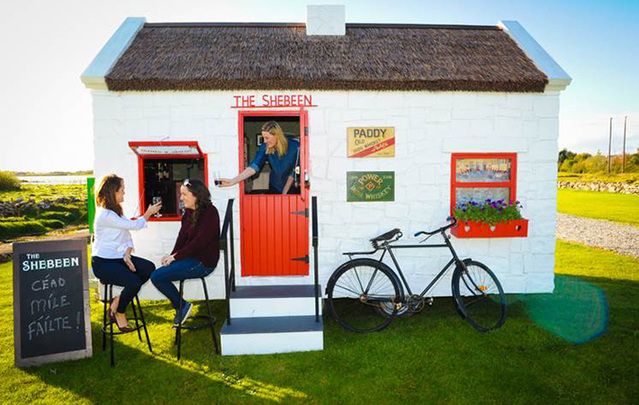 Fancy owning your own Irish pub including wheels and a thatched roof? Get your orders in.

The Shebeen, Ireland’s famous mobile Irish pub built in a converted caravan, has arrived in the United States just in time for St. Patrick’s Day.

A traditional Irish pub, albeit mobile, the Shebeen is available for private hire. It was launched in 2015 in Ireland and news of it soon spread to the United States. After an onslaught of calls and requests from the Boston area the Shebeen crew gave in and made the long trip across the Atlantic.

“It really was a no-brainer next step,” a spokesperson from the company told IrishCentral. “Also, Boston is somewhere we're very familiar with, having Walsh family living here makes it extra special.”

John Walsh, who runs Clinical Cabinets which designs and makes laboratory, healthcare and workspace furniture, came up with the idea of building the Shebeen as a Friday-afternoon wind-down for his staff.

Walsh and a friend had purchased the 1980s-era caravan in 2013 to attend the Electric Picnic music festival, but they were unable to resell the van for a good price. Now the old caravan has become a serious business for him.

Four months of hard, and skillful work, and nearly €20,000 ($22,000) later, the Shebeen has been part of several weddings, a christening, a 75th birthday party, and an IT firm’s Christmas party. It wasn’t long before orders for Shebeens started rolling in.

What’s not to love? According to the TheShebeen.com, “The interior woodwork is handcrafted in Irish oak, which has been stained and distressed to recreate that vintage feel. We used solid pine for the flooring and the seats, again aging the woodwork to create a vintage effect. Antique pictures, mirrors and carefully selected pub memorabilia adorn the walls, which have been papered in traditional patterned wallpaper.”

Sounds better than many apartment listings!

Having made the leap across the pond the newest Shebeen, including a thatched roof, is going down a treat in the US.

“The little Irish pub on wheels is proving very popular on it's exciting tour of the east coast of America," said the spokesperson. “If you would like to have this little piece of Ireland permanently in your own back yard, The Shebeen team is currently taking orders for more units being built to the customer's specific needs. If you can dream it, we can build it.”