Rachael Schmitt broke the Guinness World Record by pulling on a whopping 19 pairs of underpants all while raising awareness for 19 charities. 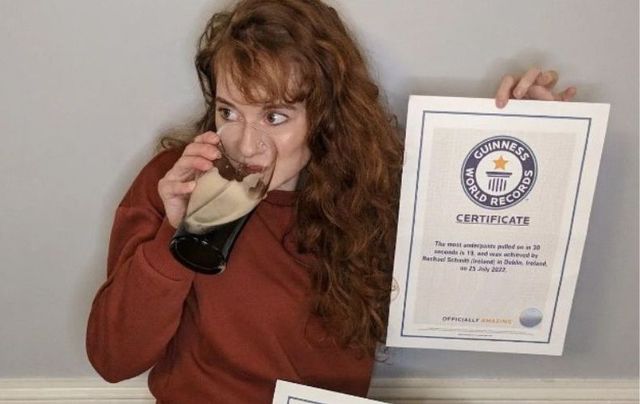 Rachael Schmitt, an American woman living in Dublin, has broken the World Record for the number of underpants pulled on within 30 seconds.

Schmitt, 30, broke the Guinness World Record by pulling on a whopping 19 pairs of underpants in just half a minute.

"Moved to Ireland and went all-in on Guinness - both the pint and the world record," the American woman said about her achievement in a post on Instagram.

"When looking for a record to attempt to break, this one stood out to me," Schmitt told Guinness World Records.

"I think this record is a great combination of speed and strategy and matches my skill set well."

She said she decided to take on the challenge because it reminded her of making quick costume changes during theater productions.

The previous World Record was set by Japan's Toshiaki Kasuga, who pulled on 17 pairs of underpants in 30 seconds.

In an Instagram post, TCD wrote: "Rachael moved to Ireland in 2019 to attend Trinity. As a child, she always enjoyed flipping through the Guinness World Record books and seeing all the awe-inspiring, skilful, and crazy things people did.

"When the lockdown mandate was lifted in 2021, Rachael traveled to Wexford. After hiking a waterfall trail, she came across Castlebridge, the birthplace of the Guinness World Records. Stumbling across the town where this legacy began felt serendipitous, and she called a friend that night and declared that she was going to break a record - adding it to a list of goals to accomplish before turning 30.

"It felt right to accomplish this in her new home in Ireland, and she is excited to use the opportunity to bring visibility to nineteen fantastic charities!"

What's the strangest World Record attempt you've ever heard of? Let us know in the comments!