Freaky footage of a pint exploding in an Irish pub will have you wondering if maybe ghosts are real! 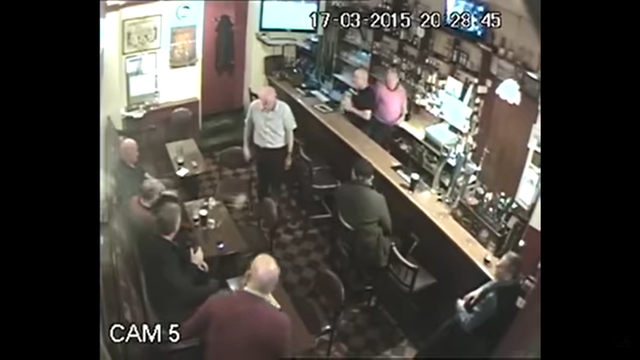 Legend has it that the bar is haunted by a Beamish drinker whose spirit took offense to this Smithwick’s pint! Broadsheet.ie / YouTube

Ghostly trickery for Halloween in Drogheda, or simply a hot glass and a cold pint of Smithwicks? You decide.

Some spots in Ireland are known for their ghostly apparitions, but the locals at Barney Mac’s pub in Drogheda, County Louth, got the fright of their lives when they saw a pint of Smithwick's explode right in front of their eyes.

This CCTV footage, posted to YouTube by BroadSheet.ie, shows the locals' confusion as the unattended pint of Smithwick's explodes - on St. Patrick's Day, no less!

Keep your eyes towards the left of the video where the patrons are sitting to witness the unattended pint shatter, leaving the pub-goers understandably baffled.

Of course, the breakage, it can be reasoned, was caused by the fact that glass was very hot coming out of the dishwasher before the very cold beer was poured into the glass causing the glass to contract and break.

However, we prefer the owner of Barney Mac’s explanation that the pub is haunted by the ghost of former patron Joe Murphy.

Apparently, Murphy was a Beamish stout man. Maybe he took offense to Smithwick's being drunk.