A big tipper in Houston means Irish boyfriend and new family will be flying home for holidays. 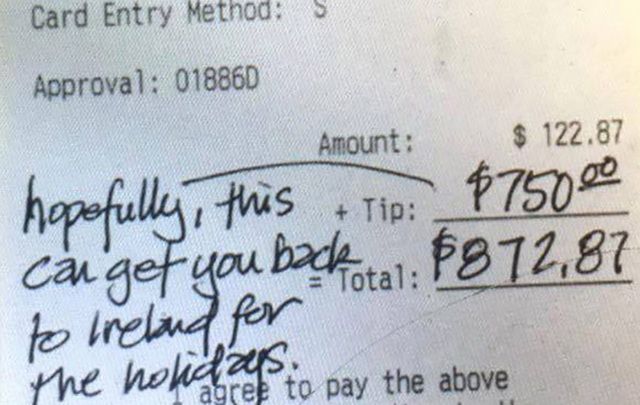 A big tipper in Houston means Irish boyfriend and new family will be flying home for holidays. Taryn Keith / Facebook.

Although the Thanksgiving has yet to arrive, most Irish minds are already thinking ahead to family time at home for Christmas. One Texan made an Irish waiter and his family’s dreams come true after tipping him a whopping amount in the hope that he could travel home for the holidays. The Irish waiter and his girlfriend will soon welcome a baby, Killian, into the world and dreamed of bringing the child home to Ireland for the holidays. Now it seems like their dreams will come true.

There’s nothing quite like some good news to make your heart swell during the holiday season.

On Sunday night, Taryn Keith posted a photo of a restaurant receipt to Facebook and explained that her Irish boyfriend, Ben Millar, had received a tip of $750 dollars from a mystery customer, known only as Jeffrey P. The massively generous tip was accompanied by the message “Hopefully this can get you back to Ireland for the holidays.”

Keith, Millar's girlfriend, wrote that she decided to post the story to Facebook “to show everyone that's there is not only hate out there.” She signed off by saying “Truly blessed.”

The heartwarming tale went viral on the site Love What Matters where it earned over 95k likes. It was then picked up on Irish media (iRadio, DailyEdge) and even on ABC local news in the US.