Dean Gonsalves rushed to the rescue of his wife Frankie, saving her from a fatal encounter with the carnivorous fish. 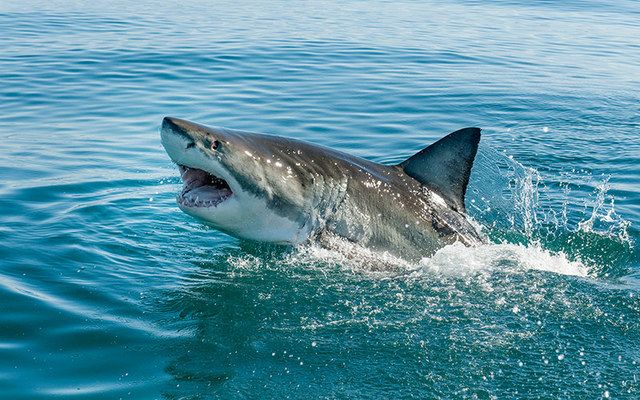 A British woman was saved from a horrific shark attack last week when her husband punched the carnivorous fish, leaving her to swim to safety, and his Irish mammy couldn’t be prouder.

Dean and Frankie Gonsalves were snorkeling in ten-meter-deep water in English Bay last Friday off the coast of remote British overseas territory Ascension Island, which is 1,100 miles off the east coast of Africa, when a shark attacked Frankie and grievously injured her leg.

Before the attack could escalate, however, her husband Dean swam to the rescue, allegedly punching the shark repeatedly so Frankie could swim away. It is believed the only statement Dean has so far given on the matter is: "Who would have known how hard a shark's head is?"

Although Dean, 40, is British-born, his extremely proud mother Anne O’Donoghue hails from Janesboro, Co. Limerick. She moved to London when she was 21. She has been quick to hail the heroic actions of her son.

“I am just thankful that he saved Frankie,” O’Donoghue told the Limerick Leader newspaper.

“He would do anything for her. He is very strong and very kind. I couldn’t ask for a better son. He is a hero, but I was proud of him before he did this. Dean is definitely making the news. It is in all the papers over here.”

Frankie Gonsalves was immediately rushed to the island’s single-doctor hospital after the incident, before being airlifted to the UK to receive treatment for the grave injuries to her calf and foot. Her injuries are reported as not life-threatening and her father Irving Benjamin has said she is in good spirits.

The couple and their two children were spending a day on Ascension Island due to travel difficulties in the area and were traveling via cruise ship to Cape Verde, from where they were to take a tourist flight back to the UK to visit family over the Spring vacation.

"Yes, I was attacked by a shark on Ascension Island on Friday. The b****** chomped on my foot and calf. Yes, Dean Gonsalves beat it up good and proper and sent it on its way! What an absolute hero. Kids traumatized by seeing the whole thing unfold in front of them. All limbs still attached but further surgery needed once back," Frankie wrote on Facebook.

Frankie Gonsalves swimming with a whale on a previous trip.

The family lives on another British overseas territory, St. Helena, and they were attempting to return to the UK for a vacation but found themselves trapped on Ascension Island thanks to closed airports and a broken-down supply ship.

An airport was due to open on St. Helena’s last May but flights have been postponed indefinitely because conditions are too windy for commercial planes to land. As a result, the island’s occupants are forced to continue using the supply ship the RMS St. Helena, which broke down in late March. To add to the troubles getting off the island, the runway at Ascension Island is also currently closed because of supposed cracks in the tarmac.

As such, the Gonsalves family considered themselves lucky to find passage on a cruise ship that would bring them to Cape Verde where they could find a connecting flight to the UK. A stop on the cruise at Ascension Island was to split the family up for the remainder of their journey, however, as Dean and the two children must  continue with the cruise ship in order to get to the UK, with no means of contacting Frankie in her hospital bed along the way.

“Dean has to go on a boat to get to Cape Verde with the two children and then he gets a flight from there on Sunday. Frankie doesn’t arrive in until Wednesday. She has had an operation on her leg but she will have to have skin grafts,” said O’Donoghue.

Although the three remote islands – St Helena, Ascension Island and Tristan da Cunha – are not in close proximity to each other, they form a single territorial grouping under the sovereignty of the British Crown. The islands have a combined total population of fewer than 6,000.

Also a British native, Frankie Gonsalves moved to St. Helena in 2015 to work for the government as a social worker and to strengthen the government’s child protection services amidst a host of allegations of official state cover up of pedophilia and sexual abuse.

A statement from her government employers read: “The person concerned was swimming near the shore and her injuries were attended to at the Georgetown Hospital.

“An emergency aeromedical flight is being arranged to transport the patient from Ascension Island to receive medical treatment in the UK.”

Warnings are given about entering the waters around Ascension Island where sharks are a common feature in the water. While swimmers enter the water at their own risk, English Bay, where Frankie Gonsalves was swimming, is generally believed to be a safe area.