Dusty is a disgruntled dolphin known locally for aggressively ramming into swimmers. 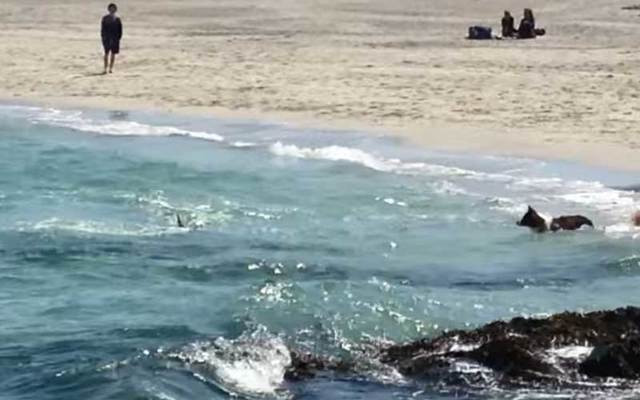 One brave Irish dog felt it necessary to confront a particularly aggressive dolphin off the coast of Galway, Ireland, after it rammed into the dog’s swimming human.

Over the years, Dusty the dolphin has garnered a reputation for hanging out near popular beaches and ramming into swimming beachgoers. Swimmer have been warned to keep their distance from the disgruntled dolphin, who has also been known as Sandy.

According to The Dodo, the dolphin was first seen in the area 14 years ago and has since then been implicated in a number of painful rammings on swimmers.

Said Simon Berrow, from the Irish Whale and Dolphin Water Group: "It's hard to know what is going through Dusty's mind. Is she protecting herself? Does she feel threatened? People do need to be aware that she is a wild animal and unpredictable and to respect that. When you do see the warning signs, do leave the water straight away and no messing as she is wild animal."

Apparently, the girl in the video below didn’t get the message about Dusty. It is unknown if she may have done something to provoke the dolphin, but her dog obviously didn’t approve of the marine mammal’s truculent behavior. The dog can been seen to come to the defense of his human, who has scampered away after the unpleasant encounter. The dolphin appears to take the hint and swims away.