Jesse Tyler Ferguson is holidaying in Ireland with his husband Justin Mikita and has shared snaps of his time in Dalkey, which famously hosted Matt Damon last year. 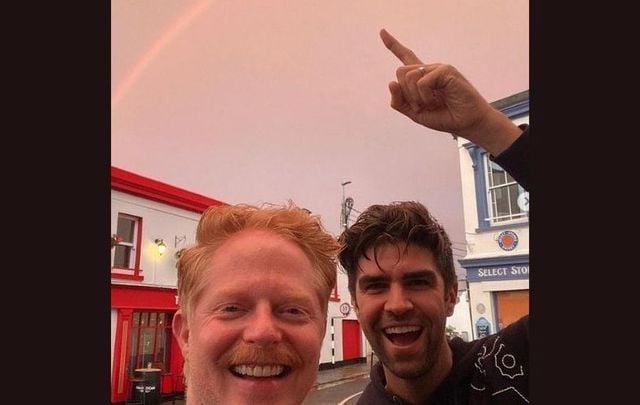 Modern Family star Jesse Tyler Ferguson has followed in the footsteps of Matt Damon by falling in love with the coastal Dublin town of Dalkey.

Ferguson, who played Mitchell Pritchett in the popular sitcom, is holidaying in Ireland with his husband Justin Mikita and has shared several snaps of his time in the affluent Dublin suburb.

The Modern Family star posed for a selfie with Mikita underneath a rainbow in Dalkey and said that Ireland was "just showing off".

In a separate post on Twitter, Ferguson said that seeing a rainbow in Ireland "hit a little differently".

Ferguson and Mikita quite literally followed in the footsteps of Matt Damon by dining in Dalkey's Corner Note Cafe.

Damon dined in the cafe during his three-month stint in Ireland in spring last year and even posed with staff members for photographs.

Ferguson has also ventured outside of Dalkey and posted a story from Bray, Wicklow, where he reworked the lyrics of Lady Gaga's to comically fit the name of the seaside town.

He also caught up with Hollywood star Elizabeth Banks, who is in Ireland to shoot her new movie "Cocaine Bear".

The 45-year-old actor said on Twitter that Ireland has been "sweet" to him since his arrival last week.