"How am I going to get a clown man?!" Irish TikTok star Jessica Harkin lamented after she was banned from Tinder for using pictures of her alter ego Kazoo the Clown. 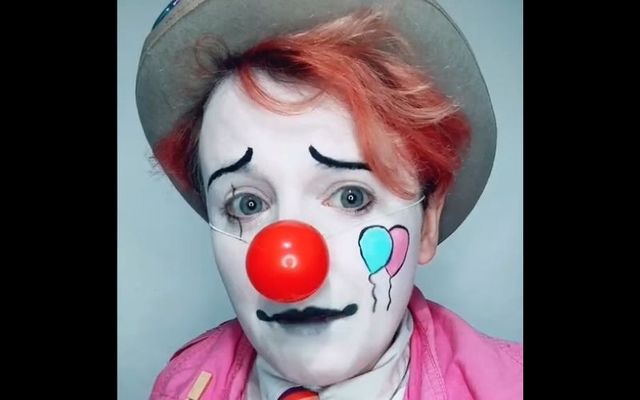 An Irish TikTok star who hilariously replaced her Tinder profile with her alter ego "Kazoo the Clown" has revealed that she has been banned from the dating app.

Jess Harkin, 25, from Co Donegal, replaced her existing profile pictures on the dating app Tinder with images of her dressed as Kazoo the Clown, stating that she was looking to find a "clown man".

She wrote in her bio: "I heard you were 'just looking for fun?' Well pal, the party has arrived!! Where can I set down this birthday cake and chocolate milk?"

Harkin shared a peek at her revamped Tinder profile on her TikTok page back in May:

Harkin then embarked on a series where she shared the interactions she encountered on Tinder with her "clown' pictures with her TikTok followers. She said her Tinder inbox was flooded with messages people impressed by her different approach to the dating app.

In August, however, the series came to an unfortunate end after Tinder banned her.

@jessicamagician The final part of my tinder series! You guys pick where I should continue this: #bumble ? #POF ? whatever you want! #tinder #clown #clowntok #fyp ♬ original sound - Jessica Harkin

"This is not fair," Harkin said, half laughing. "How am I going to get a man clown?!"

Harkin told RTÉ 2FM presenter Jennifer Zamparelli that she got more matches as a clown than she did when she was dressed in normal attire.

"I think people were matching for the craic just to see what was going on," Harkin said.