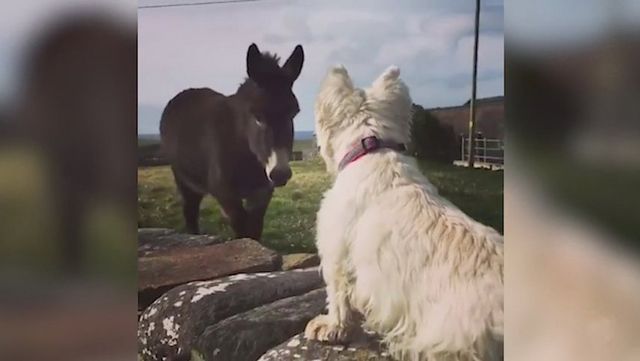 Jack and Buster hanging out at their favorite wall Twitter / Independent.ie

A bromance was recently rekindled at the Gaeltacht between two best pals Jack the donkey and Buster the dog.

Traolach Ó Buachalla‏, Buster’s owner, makes the long journey from his home in Dublin to the Gaeltacht in Kerry each year. Just over one year ago, Traolach made his annual trip to the Kerry Gaeltacht and this time brought along his buddy Buster, and that’s when the story began.

As soon as Jack and Buster laid eyes on each other there was an instant connection. Traolach said, “The first time Jack saw Buster he galloped towards him. So on our return to Kerry this Easter we went to visit Jack again and the same thing happened”.

The two friends formed a bond that could never be broken. Like any best friends a year didn’t put an end to their friendship in the slightest. The pair picked up right where they had left off, hanging out at their favorite wall.

Jack now has a girlfriend named Jill, who thankfully also has the hots for Buster. So all is well in the world. #trueromance #thruple #grá pic.twitter.com/BSfDUxKecj

A lot can happen in a year though and Jack had to introduce Buster to his girlfriend. Introducing a new girlfriend to your best friend is always a major moment in a blossoming relationship but Buster and Jill got on great together, to the delight of Jack.

This isn’t the first time the Gaeltacht has brought two friends together. Gaeltacht summer camps have been the setting for many youthful love stories just like Jack and Buster. Those couple of months can be quite the magical time; first loves, great adventures and lifelong friendships can be ignited.

The largest Irish language area of the country is in Connemara in County Galway, making up 47% of the Irish speaking population. All of the various Gaeltachts hold summer camps where Ireland’s younger population are encouraged to learn and speak the native language.

Have you any Gaeltacht stories to tell? Let us know in the comments.