Hilarious! Cork Mammy of three keeping in real in her back garden with 6-year-old photographer. 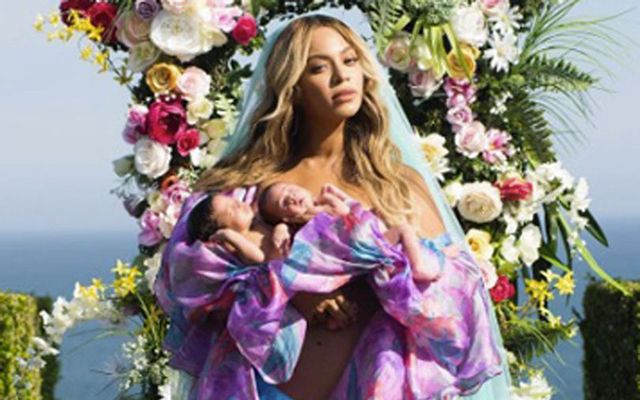 What could be better than Beyonce's twin reveal? An Irish Mammy that's what! Instagram / Beyonce

You can always count on an Irish Mammy. Beyoncé’s Instagram shot announcing the arrival of her twins, Sir Carter and Rumi, to the world, was trumped by an Cork mother’s spoof taken in her back garden with her 5-month old pair. Needless to say, the internet is loving it!

On Friday, Beyonce posted a professional shot from on a photoshoot where she wears a veil, is draped in material and they’re surrounded by flowers. Sharon Kellaway and her six-year-old took to her back garden in Kilworth, Cork, to recreate the shot, fleece blanket and sneakers included. Her twins are five months old.

Kellaway shared the snap with her friends thinking it would brighten their day but she told the Irish Mirror she never through the photos would go viral.

Not Beyonce but better: Sharon Kellaway, in her back garden in Cork.

"I had a few spare minutes yesterday when I saw Beyoncé photo online. When my six-year-old came in, I grabbed a veil from her dress up box and a pink baby blanket and she snapped the shot. I sent it to my friend Sinead in Canada, who said post it,” Kellaway explained.

"It was just random ... I have the twins, the blanket and the veil, a few home-grown flowers in the garden ... I had what she had, so why not? Thought my friends would get a giggle ... didn't expect it to go this far!”

And she has her best friend in Toronto to thank for that!

Speaking with TheJournal.i,e Kellaway joked that perhaps her photo shoot situation wasn’t quite up to the high standards of Beyoncé’s surreal shot.

“I wonder how many photos Beyoncé had to get through to get the right one. My 6-year-old took the photos … no qualifications and still did a mighty job.”

The Cork mom said she’d posted it to Facebook for the laugh thinking it would get 30 or 40 “Likes”. She was shocked when she “woke up to a string of messages from newspapers and reporters.”

We’re loving Kellaway’s message though. She pointed out that “Beyoncé will never really know what it’s like to have twins 24/7! Her life is the photo she put up all glam and photoshopped… the reality is €6 runners from Penneys and unshaven legs!”