Abbey Ní Loinsigh and Stephen O'Dea got their party started early when they invited fellow musicians to play in an Irish trad session during their wedding in Cobh, Co Cork. 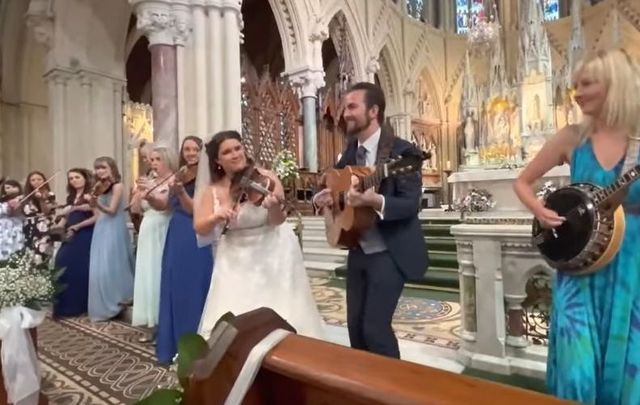 Video of the rousing Irish trad session from the recent wedding of Abbey Ní Loinsigh and Stephen O'Dea in St. Coleman's Cathedral in Cobh, Co Cork is going viral online.

The newlyweds, who are both teachers and musicians, had asked any music-playing guests to bring an instrument to the church on the day of their wedding, reports Corkbeo.ie.

The memorable moment was created when around 20 people -- including the bride, with a fiddle -- burst into a lively music session during the service.

The musicians included both Abbey and Stephen's sisters, the father of the bride, as well as other family and friends.

"Best day of our lives," O'Dea said when he shared the smile-inducing video on social media. "So lucky to have such an amazing wife, friends and family."

The couple, who spoke to PJ Coogan on the 96FM Opinion Line show, said they took the idea from friends who did something similar at their wedding some weeks before.

Abbey said: "We were thinking why didn't we organize something like that. Then we realized how many people we would have at the church that can play, so we just made a Whatsapp group to say, 'if you've an instrument, come on, we're going to do these two tunes."

After their wedding, Abbey and Stephen traveled to Co Donegal for their honeymoon. They said they plan to bring their instruments when they attend another friend's wedding in Co Meath.

WATCH: Irish bride and groom brought to tears by surprise "Stand By Me" performance