An Irish couple living in Australia fly home to Ireland with their new son, giving their parents the Christmas surprise of a lifetime. 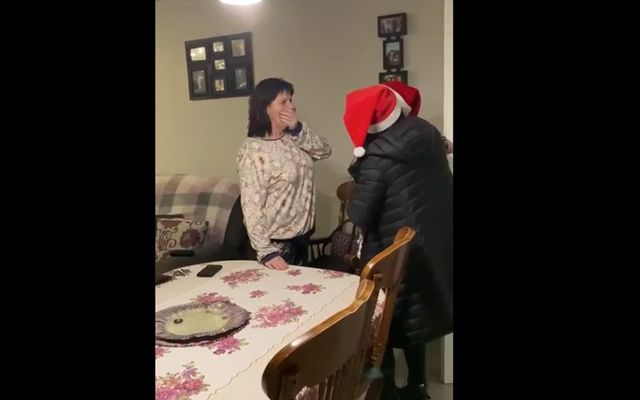 An Irish couple living in Australia surprised their parents by coming home this Christmas with their one-year-old son. Facebook/Monica McCafferty

Seeing these Irish grandparents meet their one-year-old grandson for the first time this Christmas will warm your heart.

Fergus Reid, from Kildare, and Monica McCafferty, from Donegal, had their son Jack in Australia in October 2020.

Due to travel restrictions put in place because of the pandemic, the couple was unable to fly home to Ireland so their son could meet his grandparents.

During the first year of his life, both sets of grandparents could only see the baby grow up on Facetime.

Monica told the Donegal Daily: “I can’t explain how hard it was not to be able to show off our newborn baby, or to celebrate his first birthday without his grandparents being there."

As soon as travel restrictions lifted, the couple booked a flight home. However, to avoid disappointing their parents in case restrictions were put in place again, Fergus and Monica decided to keep their plans a secret.

The only person that knew they were headed home was Monica's sister, who was on put on  'high chair and cot-finding duty' for their arrival, according to the Irish Examiner.

The couple first surprised Fergus’ parents Christine and Ger in Kildare, before traveling on to surprise Monica's parents, Joe and Rosemary in Ballybofey.

The couple was worried that the secret would get out that they were home before they could get to Monica's parents, but luckily they were able to pull off another surprise in Donegal.

Both sets of grandparents were completely shocked to see their children and adorable new grandson show up at their doors.

“It’s safe to say they got the shock of their lives!" said Monica.