"Fairytale of Qatar" co-opts the Irish Christmas classic 'Fairytale of New York" as a song of support for England in the 2022 World Cup. 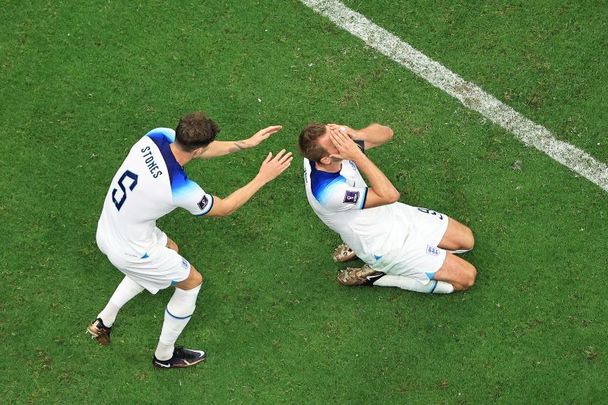 November 25, 2022: Harry Kane of England reacts after a missed chance during the FIFA World Cup Qatar 2022 Group B match between England and USA at Al Bayt Stadium in Al Khor, Qatar. Getty Images

The so-called "Fairytale of Qatar" song, posted on the Christmas Number One TikTok account, reworks the lyrics of some of Kirsty MacColl's lines to fit descriptions of English players, changing the famous "they've got cars big as bars" line to a reference about Jack Grealish's calves.

"They've got calves big as cars, they've got rivers of Stones," the parody begins, in a reference to English players Jack Grealish and John Stones.

"Harry Kane goes right through you and heads for the goal," it continues.

The song finishes with a truly lamentable chorus: "The boys of Southgate's England team are sat upon a throne, and the crowd are singing out 'it's coming home.'"

"How can I unsee this?" One Irish Twitter user wrote after the TikTok was shared on Twitter.

"You do worry for them sometimes," said another.

Another Twitter user joked that the "British Ambassador should be sent home in protest."

"God has forsaken us," another Irish Twitter user wrote.

"Ireland should declare war on England for this," a Dublin Twitter user wrote.

"Diplomatic relations between Ireland and the UK about to take another dive," Irish journalist Richard Chambers tweeted.

Meanwhile, England has progressed to the knockout stages at the ongoing 2022 FIFA World Cup in Qatar after topping a group with the US, Iran, and Wales.

The Three Lions, who boast five players of Irish descent in their squad, take on Senegal in their round-of-16 fixture at 2 pm EST on Sunday, December 4.

The USA, who came second in England's group after beating Iran in their final group game, will take on the Netherlands on Saturday at 10 am EST.