Irish doctor Maitiu O Tuathail said, "I managed to get six face masks on + it had no effect on my oxygen levels!" 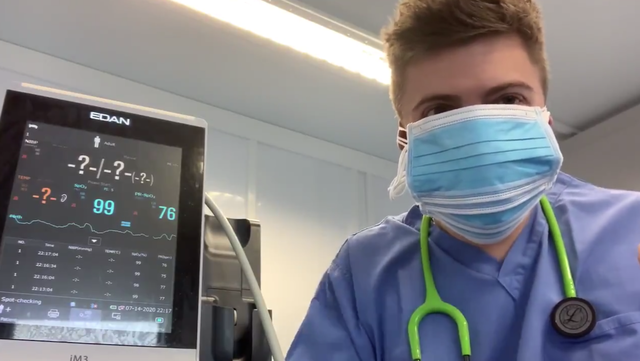 An Irish doctor has gone viral after he donned six face masks in a social media video to debunk the myth that wearing face masks reduces people's oxygen levels.

Maitiu O Tuathail, based in County Dublin, posted the video on Tuesday, July 14, on his personal Twitter account.

The Irish general practitioner said that he had encountered a number of misinformed patients who believed wearing a mask would negatively affect their oxygen levels and decided to film himself wearing six months at the same time to prove that they don't have any impact on oxygen.

In the clip, O Tuathail puts on mask after mask while measuring the oxygen levels in his blood.

Read more: Masks could be mandatory in Ireland

As he dons each new mask, his oxygen levels remain at a very healthy 99%.

"I managed to get six masks on and it had no effect on my oxygen levels," the doctor said on Twitter.

“Does wearing a face mask lower your oxygen levels” repeatedly by patients today!

Based on what they are reading on social media

I managed to get six face masks on + it had no effect on my oxygen levels! pic.twitter.com/qNKYa8pejx

Almost 200,000 people have watched the video since it was posted on Tuesday.

The Irish Government is introducing stringent measures to ensure that people wear facemasks on public transport or in retail outlets during the COVID-19 pandemic.

The wearing of face coverings on public transport was made law on Monday, July 13, punishable by a €2,500 fine or up to six months in prison.

Taoiseach Micheál Martin additionally announced that the wearing of face coverings in retail outlets is to be made mandatory in the near future.

O Tuathail said that a number of his patients had been misled by incorrect information on Facebook about facemasks and said that he wanted to clarify that wearing masks does not affect oxygen levels.