Dublin dad, whose daughter received a bone transplant at 10 months, hopes the photos will raise awareness for becoming a bone marrow donor. 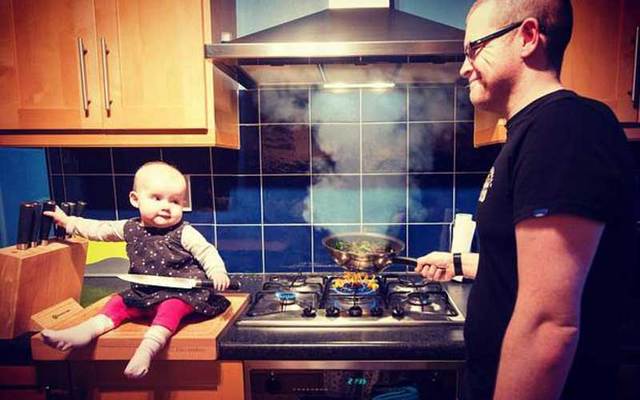 Photoshopped photo shows baby holding a knife near the stove as her dad looks on. Steec/Imgur

An Irish dad’s photos of his infant daughter Photoshopped into “marginally dangerous” situations has gone viral.

Stephen, a 32-year-old designer in Dublin, started creating the photos when 18-month-old Hannah came out of the hospital after receiving a bone transplant at 10 months, reports Independent.ie.

"She had a very rare immune disorder called HLH and spent six months of her first year in hospital, receiving chemotherapy and a bone marrow transplant, which is the only possible cure," Stephen told Huh Magazine.

"Of 27 million worldwide donors, 3 were deemed suitable, and an anonymous German lady donated. Because we missed out on so much normal stuff of the first year, we take tons of photos now that we're able to do normal things out of isolation."

Stephen hopes the popularity of the photos will help raise awareness for becoming a bone marrow donor.

He also wants the photos to make people pause and think, "Wait, did he...?"

"I thought it would be fun to worry family by putting someone delicate in precarious situations," he said.

"Most of the reactions have been positive, with the odd person not getting the joke and commenting I 'should be shot.'"

For more information of becoming a bone marrow donor, go to giveblood.ie.