WATCH: New #WeBelieve Irish Christmas ad will have you in tears

The new Irish Christmas ad from SuperValu brings together a lost reindeer and a little girl ... we're not crying, you're crying! 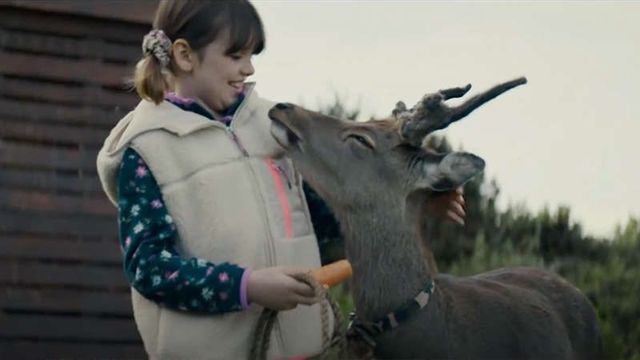 This gorgeous Christmas ad from SuperValu has it all! Holiday wonder, reindeer, Santa, suspense! This tear-jerker is worthy of its own movie script.

There's long been a tradition of emotional Christmas TV adverts to pull at the heartstrings but this year's ad from Super Valu has just taken the biscuit!

The sweet ad, worthy of a movie script in our opinion, tells the story of a little girl who rehabilitates a lost reindeer in what appears to be a suburban housing estate. The injured reindeer is of course one of Santa's helpers who needs to get back to the North Pole in time for the big day!

"He's hurt. How will he fly back to Santa?" the brilliant little actor Penny Lynch pleas.

Take a look! If you don't shed a tear we'll be surprised.

... We told you! As if the gorgeous ad wasn't enough, the back story to its stars is just as touching. The reindeer, with a clear future in acting, is a rescue deer.

The reindeer who stars alongside Penny Lynch in the ad is named Deermuid (a take on the popular Irish name Diarmuid). His handler, Eddie Drew, told the Irish Examiner: "Deermuid is nine years old and absolutely loves people. He was sadly abandoned by his mother as a fawn, but this meant he was bottle-fed and grew up on a farm, making him extremely sociable and comfortable with humans.”

Deermuid, who lives with Eddie in County Wicklow, is "fed twice a day with water, carrots and Sean’s Brown Bread which is his absolute favourite!”

Speaking about her time filming the ad, Penny said, “Filming the ad was the best week ever! Even though the weather was terrible I still had the most fun with Deermuid. Deermuid and I had two playdates before the shoot so we were good friends from the beginning.”

The ad was directed by Ben Liam Jones, whose work includes shorts for the likes of SKY, Cadbury, Arthritis UK, Land Rover, and Centerparcs. He said the ad was inspired by Steven Speilberg's "ET".

He told the Examiner "It is a dream of mine to make an Xmas movie one day and I suspect this is the closest I’ll ever get.

"Ripped off all my favourite Spielberg moments off and I don’t care who knows it. Thanks to an amazing team who turned this around in such a short amount of time. And the amazing trust from everyone involved."

The reaction online to the advert launched on Nov 22 has been immense. One commenter wrote, "I’m gonna go cry myself to sleep now thanks besties".

Another wrote, "Love it…..I have a lump in my throat watching it".

"Omg I'm crying. What a lovely story!!" a third commented.

It's just such a sweet Christmas ad!