Beautiful video as Irish child sings to great-grandmother with dementia

Five-year-old Sophie Miller sings “You are my sunshine” as she meets her great-grandmother for the first time in over four years. 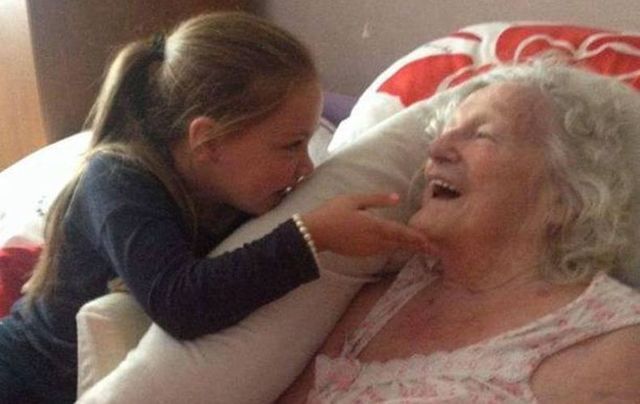 Five-year-old Sophie Miller sings “You are my sunshine” as she meets her great-grandmother for the first time in over four years. Irish Independent

Five-year-old Sophie Miller sings “You are my sunshine” you cheer up her great-grandmother.

Sophie Miller, who lives in Ireland, had not seen her great-grandmother Breda since she was just nine months old but the five-year-old knew just the right way to get reacquainted with her after over four years apart, serenading her “great Nana” with “You are my sunshine.”

Living in London, Breda is blind and as young Sophie had not met somebody with dementia, her mother Sarah was concerned that she would be a bit nervous meeting her great-granny after all this time.

The pair hit it off like a house on fire, however, with shopaholic Sophie hoping to stay longer with Breda rather than hit the shops while she was in London, and Breda telling everyone all about her childhood when she was Sophie’s age.

Read more: This Irishman is walking 1,500 miles for dementia research

Sophie’s grandparents Yvonne and Sandy travel back and forth between England and Ireland to keep an eye on Breda and always bring Sophie back a new video of her great-granny but it had been a long time since they had been able to spend any time together.

Her mother described the meeting as “wonderful” with Breda full of smiles as young Sophie strokes her face as she sings.

"We were worried (Sophie) would be scared... but she wasn't. She was sitting up, rubbing her face, singing songs to her and chatting away... she loved it,” Sarah told the Irish Independent.

"It's like Nana came back to life. She was chatting about when she was young - it's as if she went back to being a child.

"She was crying... she said it was breaking her heart. It was as if she knew she had dementia and couldn't express herself.

Great-grandmother Breda and young Sophie hit it off immediately

"She was following Sophie, all she wanted was Sophie,” she continued.

"Normally, all she calls for is her husband Joe. When Sophie left, she was calling for Sophie through the night.

"We never knew anyone with dementia before... kids are a breath of fresh air.”

Unfortunately, Sophie had to return to Ireland soon after and was upset to have to leave her new found friendship behind.

"Sophie didn't want to leave Nana. She was very upset. When we landed, she was bawling,” Sarah said.

"She's a sensitive little thing, she'd always be in tune with people's feelings.”