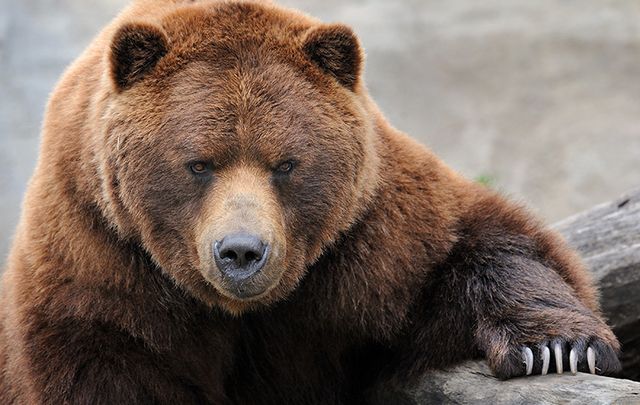 An Irish American living in Colorado has described his shock and horror after a 375-pound wild bear raided his home. Amazing CCTV footage shows the massive bear opening the fridge to look for a snack.

Chris O’Dubhraic, whose grandparents hailed from County Clare, had collapsed exhausted into bed after a business trip to Asia left him completely jet-lagged.

Only when he woke up from his deep sleep did he realize that his home in Colorado Springs had been completely trashed after a six hour visit by a local bear.

With paw prints and scratches all over the house, there was little doubt that no human intruder was behind the state of O’Dubhraic’s home.

WOW! Watch this hungry bear invade a kitchen in Colorado. The bear was in the house for some 5 hours while the homeowners slept upstairs! pic.twitter.com/RkQB2JRs7O

Stepping gingerly into his kitchen he heard “heard some rustling and some noise” from outside that he now thinks came from the bear and which he recalled sent “a shiver went up my spine”.

After watching CCTV footage he realized the bear had spent an astonishing six hours exploring and mauling the house, all whilst he remained blissfully unaware in a deep sleep.

The bear first got in via a slightly opened window and that had been damaged by a recent storm.

During his six hours in the house he explored the house and urinated in multiple places. Wildlife experts explained that this is a common behavioral practice amongst animals who want to mark their territory and indicated the bear hoped to return.

He also ate all O’Dubhraic’s fruit - the strawberries, cherries, blueberries, pineapple and apple oatmeal he bought on his return all vanished - but if the bear was hoping for some protein he was out of luck as the Colorado man is a vegetarian.

His trash compactor was also twisted into an unusable pulp and the bear even ripped a pantry door off its hinges.

In total the damage is estimated to run into thousands of dollars.

Bill Vogrin, who works as Colorado Parks and Wildlife public information officer, told The Gazette, that the bear has since been found and killed after it was deemed a danger to the public.

Officials quickly concluded from O’Dubhraic’s footage that it was the same bear that had broken into a home in nearby Broadmoor, trapping the petrified owner in her car whilst it lumbered around her garage.

Other neighbors had seen the bear eating out of trash cans - suggesting a taste for human food.

It’s lack of fear for man meant it was judged a danger to the public and a sentence of death imposed and carried out.

Efforts to lure the bear into the open with human food, such as donuts and yoghurt had recently failed, so when he was spotted by a local journalist, officials acted fast.

“One of the US [Department of Agriculture] officers was waiting for him,” Vogrin explained. “He was positioned high and shot down on the bear... around 10 a.m. It was one shot — a very safe, clean, efficient shot so there was no risk to neighboring houses.”

As for O’Dubhraic, he told the Irish Independent he has never been to the land of his grandparents but "hopes to visit soon."

If he visits he’ll likely only encounter a bear in a zoo as they’ve been extinct in Ireland for thousands of years.

However there have been sporadic initiatives to try and reintroduce wolves to Wicklow - meaning there’s no guarantee O’Dubhraic won’t come face to face with wild beasts again.