The Irish Pub in Nepal is located 3,450 meters and is reached by a two-day trek, through the Himalayas. 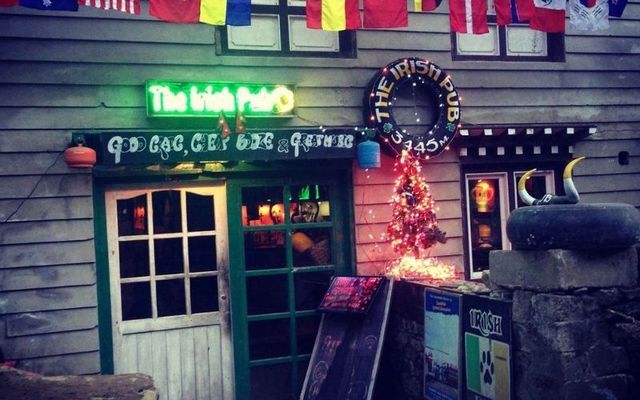 Standing at the gates of Mount Everest, the highest and most remote Irish pub in the world is welcoming customers back to enjoy a pint more than two miles above sea level.

The Irish Pub in Namche Bazar, Nepal is located 3,450 meters and is reached by a two-day trek through the Himalayan Mountains.

The small town of Namche Bazar, known as "the Gateway to Everest", attracts thousands of visitors every year who have the option of stopping off in the pub before taking on the world's tallest peak.

Reaching the pub is no mean feat. Travelers must fly into the "world's scariest airport" and hike for two days before reaching Namche Bazar.

However, a proposed new road from Lukla Airport to Namche Bazar would make it much easier for bar staff to bring in food, beer, and even pool tables.

The Irish Pub features a large bar and fireplace in addition to foosball tables, pool tables, and widescreen televisions with international channels.

It also offers a wide range of alcohol with an emphasis on imports from Ireland, including Guinness, Jameson, Murphy's, Baileys, and Erin's Rock.

Owner Dawa Sherpa, who grew up in Namche Bazar, told the BBC last year that he was inspired to open the pub after his brother Phurba Tenzing visited an Irish bar in Kathmandu.

The brothers believed that they had an opportunity to open the highest Irish bar in the world, standing 50 meters higher than Paddy's Bar in Cusco, Peru.

"We worked out the elevation,” Dawa told the BBC last year. "They were 50 meters below us."

The brothers opened the Irish Pub in 2011, making it the highest and most remote Irish bar in the world.

Dawa said that supplies are flown into Lukla Airport off-season and carried to Namche Bazar by porters.

He added that the bar cannot use yaks or mules to carry the goods because the paths are too fragile, so humans must lug the goods over a two-day trek.

Dawa charges $6.70 for a pint of Guinness and said that he doesn't make a significant profit margin selling the Black Stuff.

"But we’re an Irish bar - we have to sell Guinness," he told the BBC.

He said that his average customers are from Australia, the US, or Europe and are "people who just summited Everest, or people who’ve been to base camp for the first time".