Hero dog rushes to the rescue of drowning deer (VIDEO)

The dog of a Long Island-based Irish American is the hero we all needed this week, as footage emerges of English golden retriever Storm coming to the rescue of a drowning deer. 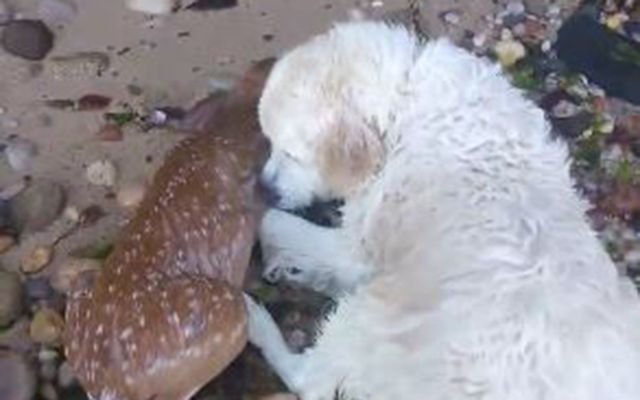 The dog of a Long Island-based Irish American is the hero we all needed this week, as footage emerges of English golden retriever Storm coming to the rescue of a drowning deer.

Mark Freeley was walking his two dogs Storm and Sara by PJ Harbor last Sunday when his golden retriever noticed a fawn in difficulty further out in the water. Plunging into the water to help, Storm secures the baby deer by the neck and begins to bring it in to shore while Freely shouts his encouragement.

“Good boy, Storm. Bring him in,” Freeley can be heard saying in the video.

Once safely back on the dry land, the distressed dog continues to paw at the deer anxious to make sure that it’s ok.

“And then he started nudging it, and started pulling it to make sure she was gonna be OK I guess.”

The terrified fawn was not completely safe from harm yet, however, as apprehensive of the two dogs, it rushes straight back into the water swimming further out than before as Freeley calls he experts to check on it and make a second rescue.

Frank Floridia of Strong Island Rescue joined Freely in wading out into the water, spending eight minutes trying to rescue the deer before they were able to bring it back to shore.

“It was a do-or-die situation,” Floridia told The New York Daily News. "I really didn’t have much of a choice. If I didn’t go in the water, the deer would’ve died.”

From there his animal rescue partner Erica Kutzing took the reins after running a mile down the beach to meet Floridia emerging from the water.

“I don’t think I could’ve done it without the help of my partner,” he said. “I was exhausted at the point my knee blew out, and I collapsed on the beach.”

Carrying the deer to the rescue van, Kutzing noticed it had a cut to its eye and wa covered in ticks. The deer is said to be recovering well, however, and will be released again into the wild in the coming months once it has fully recuperated.

The video clip of Storm’s rescue has since gone viral and everyone applauds the hero dog and his quick thinking.