Marley, a three-year-old Golden Retriever, fell 15ft down a cliff during an afternoon walk with his owner. 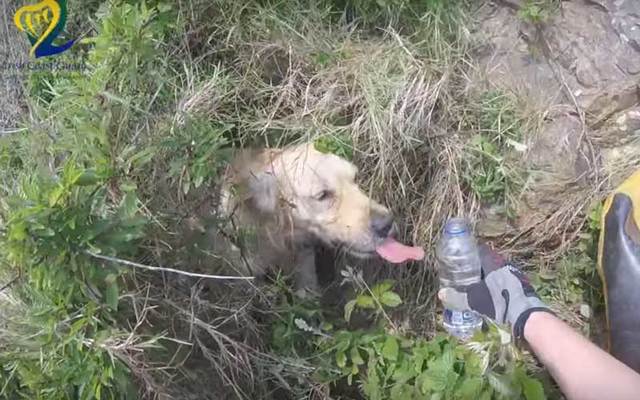 Rescued dog is offered a drink of water. YouTube/HowthCoastGuard

A dog who fell 15ft down a cliff during a walk with his owner was rescued by the Irish Coast Guards.

Marley, a three-year-old Golden Retriever, fell on June 19 during an afternoon walk with his owner at Red Rock in Sutton, Ireland.

Marley’s owner called the Irish Coast Guards and a response team from the Howth Station was quickly dispatched. The Dublin Fire Brigade also arrived on the scene.

A climber from the Irish Coast Guards belayed down the cliff to reach the tired and thirsty dog. After giving Marley some water, the climber secured him into a harness before lowing him to the beach below, where he was reunited with his owner.

Marley was not the only dog rescued by the Irish Coast Guards that day.

Earlier, another dog had swum out to sea and could not return. The Irish Coast Guard safely brought the dog back to shore using a Dublin Port boat.

A spokesperson for the Irish Coast Guard said that the owners had done the right thing by calling for help immediately, instead of trying to rescue their dogs themselves.