Gardaí were challanged to a virtual dance off by their Swiss counterparts eariler this month. 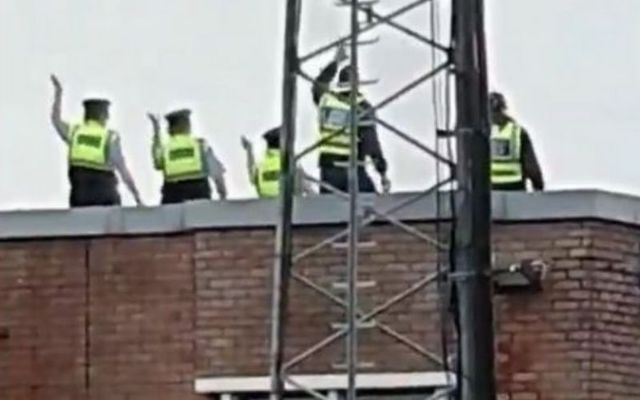 Gardaí were filmed practicing their best moves on a rooftop in Tralee. Donna Byrne Twitter

Gardaí in Kerry were spotted practicing a dance routine on a rooftop as part of An Garda Síochana's response to Swiss police, who challenged them to a virtual dance-off earlier this month.

Members of An Garda Síochána in Tralee perfected their choreography to the amusement of bystanders who filmed the practice session from afar.

Officers side-stepped and shimmied their way across the rooftop as they geared up for the viral challenge.

Members of garda in tralee practising the ' Jerusalem ' dance !!! Working flat out !!! pic.twitter.com/oqck2yxM2H

Swiss police took to social media earlier in January to challenge police forces around the world to a virtual dance-off in a video that has been viewed 730,000 times.

Police officers in Switzerland @fedpolCH decided to do something special for its people in these dark times. Just amazing! @gardainfo? Will you accept the challenge if enough people retweet this? #Garda #Ireland #Police #Jerusalem pic.twitter.com/n32XWzwO5j

French and South African police officers have since risen to the challenge, posting two-minute-long videos of officers dancing to the viral hit.

Gardaí are yet to post their official dance video but accepted the challenge in a tweet on January 16.

"We are very happy to accept. We better get practicing on our Riverdance routines," Garda Info said on Twitter alongside a GIF of Michael Flatley and Jean Byrne from their original performance of Riverdance in 1994.

We are very happy to accept. We better get practicing on our Riverdance routines https://t.co/uTACK0U9nj pic.twitter.com/d8sqcbERSG