Is this 4-year-old Irish dancer the next Michael Flatley?

This young lad is sure to have a bright future in Irish dance! 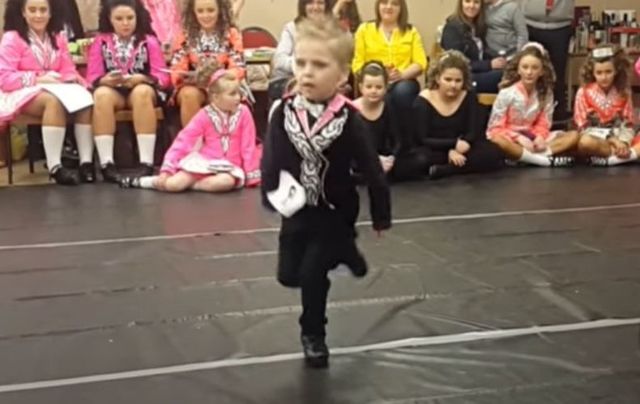 Young Irish dancer from Scotland, Oscar Donnelly, is a star in the making. Fusion Fighters, Facebook

Forget "Riverdance", Irish dance could have a new Lord of the Dance on its hands in this adorable Irish dancer whose footwork is super fast!

The talent of Irish dancers around the world will always continue to amaze us but few quite so much as this tiny Irish dancer from Scotland, a sure set star of the future.

Adding his own self-choreographed steps, Oscar Donnelly, who was just four years old at the time, performed the set dance the Kilkenny Races, in 2016, at a speed of 110 BPM (beats per minute). For those who aren’t quite up to speed on their Irish step dance lingo, this is extremely fast for a boy who has not even started elementary school yet. It’s the speed that most teenagers will attempt!

In fact, most Irish dancers of his age are still working solely with soft shoes and do not take on the heavier hard shoes until they’re a little older, making his talent all the more remarkable.

The video below was shared by Irish dance aficionados Fusion Fighters and has topped more than 900k views!

Oscar, who turned five in July 2016, dances for the Stephanie Duff School in Scotland and has been dancing since he was three.

He was such a clear natural that Oscar began to compete in October 2015 and in that short space of time has already brought home a massive 18 trophies and won four big championships including All Scotland's (Under 6 Champ) and other championships in London and Dublin.

Unfortunately, outstanding Oscar has a bit of a wait until he can compete on a world stage, as he won’t even be allowed to enter the World’s until he’s at least 11. We can’t wait to see what he’ll achieve at that stage with another seven years of practice behind him. His Irish dancing competitors must be shaking in their boots already!

Oscar’s Mom Annie Walters has said that his talents don't just lie in Irish dance but Oscar’s natural rhythm attracts him to all types of dance.

“He loves dancing to all music, not just Irish music,” she said.

“He's always had a great understanding of music and rhythm which I think makes him as good as what he is!“It's just impressive that he does all this and he's still at nursery [kindergarten]."