WATCH: Irish priest is the star of the show at this wedding in Co Meath 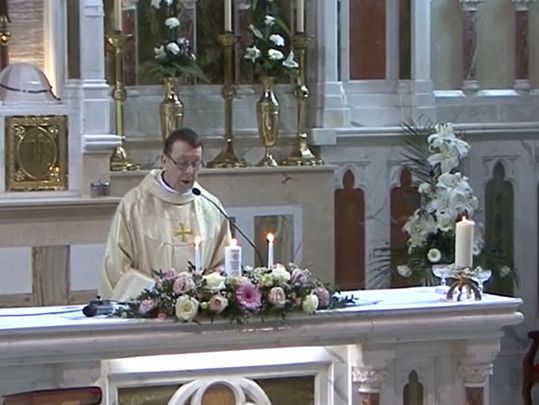 Father Ray Kelly was the star of the show when he celebrated a wedding in Oldcastle, Co Meath back in 2014.

Father Kelly, known affectionately as "the Irish singing priest," performed a stunning rendition of Leonard Cohen's 1984 classic "Hallelujah" for Chris and Leah O'Kane's 2014 wedding - however, he sang it with original lyrics suited for the newlyweds:

We Join Together Here Today,

To Help Two People On Their Way,

As Leah And Chris Start Their Life Together,

We've Come To Help Them Celebrate,

And Show Them How Much We Love Them Too,

As Leah Is Walking Up The Aisle,

And Chris Looks Up And Gives A Smile,

The Love That Flows Between Them Fills The Church,

With Leah's Friends And Family On Her Side,

She Really Is The Blushing Bride,

With Love And Pride They Lead Her

With The Priest And The Family Who Lead The Prayers,

We Say Our Lines And They Say Theirs,

I Guide Them Through The Ceremony,

And In This House Of God Above,

They Join Their Hands To Show Their Love,

And Say Those Most Important Words That You Heard,

The video, not surprisingly, went viral. Afterward, Father Ray Kelly told BBC: "Normally local people know I sing at weddings, funerals or when I'm asked, but they didn't know - the bride Leah is from Dublin and the groom Chris is from Cookstown in County Tyrone.

"They were having their reception at a hotel about 10 miles away and chose our church.

"We had the rehearsal on Thursday evening and at the end, I said, 'sure maybe I'll sing an aul song for you myself' - Leah grinned and said 'OK sure' but I don't think she was taking it too seriously."

Patrick Rushe, who was filming the wedding ceremony, said: "The band Sunlight who had been doing the music for the wedding had just finished singing when he put on the backing track, but people were still looking at them as they didn't know where the music was coming from - they were shaking their heads and saying it wasn't them.

"At the end of the song he got a standing ovation."