Irish woman Dervla's video of Matty Healy, frontman for The 1975, reacting to her Irish name has gone viral and stirred up lots of opinions. 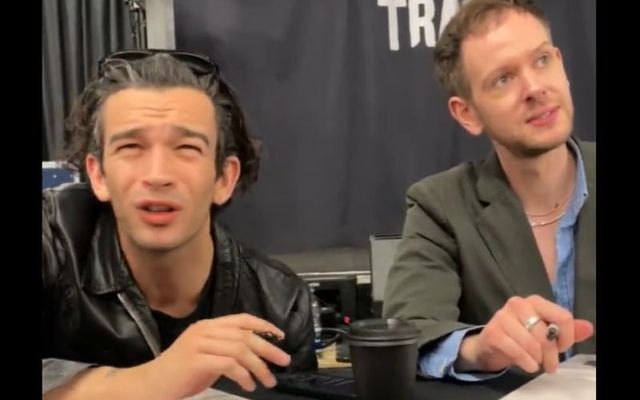 Matt Healy, frontman for The 1975, had an over-the-top reaction to meeting an Irish fan named Dervla. @itsdervz, Twitter

Irish woman Dervla is going viral after she filmed The 1975 frontman Matty Healy's hilarious reaction to her Irish name.

"What's your name?" Healy asks Dervla at a meet-and-greet for fans at Rough Trade East in London on October 16.

"I know," Dervla acknowledges in the video.

The Irish woman's initial tweet has gone viral, racking up more than 77,000 likes and more than 1.5 million views:

his response to my name is fucking sending me😂😂 pic.twitter.com/JRgvlA9YfE

In a "bonus" video posted by Dervla, Healy says: "Dervla? Is that like something you move gravel with?

have a bonus clip of him telling me my name sounds like something you move gravel with 🫠 pic.twitter.com/WSDsGMmJwR

congrats on spelling it right tho pal xx pic.twitter.com/YMQ3WSDe86

Dervla has since come to Healy's defense after he was criticized for his reaction.

"People need to go touch some grass," Dervla wrote, "bc [because] I had just absolutely mugged him off mere seconds before so I knew this was coming."

Elsewhere she tweeted, "This has been taken so out of context he wasn’t being horrible to me."

Despite Dervla's take on the situation, plenty of people have had plenty of opinions on the matter, some expressing outrage and others seeing the humor.

"At what point I wonder does taking the piss out of someone because of their language and culture amount to racism? Prat," Feargal Sharkey, a singer from Derry, wrote on Twitter, adding "You owe that young lady an apology. Let's see if you're man enough."

"Look at this Irish person saying 'I know' about her name as a Brit insults her ancient Irish name," one Irish person tweeted. "We need to stop being ashamed of our culture and stop allowing Brits to believe they're superior."

"Why’s he reacting like she chose her own name at birth," another wrote. "Keep your scribble, hun."

"Needlessly overreactin to an ethnic Irish name for a cheap laugh definitely is British humour but it's not the defense you think it is," wrote another.

"Imagine him being hit with a Siobhan," one person tweeted.

One person provided this helpful graphic:

What this? Oh it’s just my Dervla mate. pic.twitter.com/Dmb6SmlFpJ

And, as always, Not the RTÉ News had a very measured reaction:

BREAKING: Matty Healy has declared war against the nation of Ireland upon discovering the name "Dearbhla" pic.twitter.com/ANbmlsflk5