Scottish man Dale Mclaughlan is laughing off some of the criticism he's faced since his stunt at Giant's Causeway. 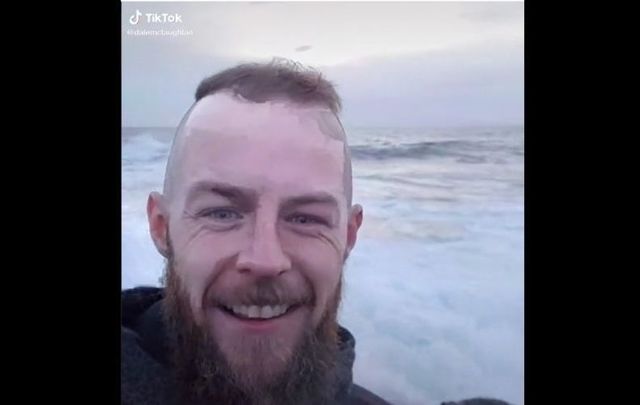 Making a splash! Dale McLaughlan's injuries could have been much worse after Giant's Causeway stunt. @dalemclaughlan, TikTok

Dale Mclaughlan says "Life is for living" following a dangerous stunt at Giant's Causeway in Co Antrim in Northern Ireland.

Mclaughlan, who became known as the "Romeo roofer" during for Covid for trying to jet-ski across the Irish Sea to see his girlfriend, has made the press yet again.

This time, the Scotsman, who can not swim, has gone viral for trying to take a selfie at the Giant's Causeway in Co Antrim before a large wave dramatically threw him to the ground, breaking his finger.

Mclaughlan (29) was visiting the volcanic rock formation with his friend Arron Martin (28) on September 30 when the footage was recorded. It's been viewed over 150k times so far and has met some stern words and backlash online.

Smiling at his camera, Mclaughlan posed to take a selfie but was quickly swamped by a massive wave. Luckily he only broke the forefinger of his right hand despite being crushed against the rocks. He also managed to retrieve his phone from the choppy sea.

Having posted his video online, he has received quite a bit of backlash from the public. One dubbed him to be a perfect entrant for the "Darwin Awards" while another wrote, "Lucky you didn't get swept out". Another said, "Seriously dangerous doing that and putting the lives of rescue works at risk then. Incredibly stupid behavior."

Mclaughlan laughed off the criticism saying "life is literally for living".

Speaking to the Daily Mail, Mclaughlan said: "We had just come back from the gym when we realized how close we were to the Giant's Causeway and wanted to run over and check it out.

"We're only over for a few weeks while contracted for work. We wanted to take the opportunity to do some sightseeing and I've always wanted to see it.

"I didn't want to pass up the chance to see it. There are a few things that say the rocks are slippery but I wanted a selfie with the waves. We'd been soaked just before the video started.

"I broke the forefinger on my right hand. Fortunately, it hasn't stopped me from working, I've definitely been through a lot worse.

"Me and Arron have been friends all our lives. He's just used to my hijinks now, he just shakes his head and rolls his eyes at me."

In December 2020, Mclaughlan, from Irvine, North Ayrshire, in Scotland, made headlines when he was arrested after he jet-skied across the Irish sea to the Isle of Man to be reunited with his girlfriend Jessica Radcliffe. It later emerged that Mclaughlan doesn't know how to swim.

At the time, Radcliffe bowled over by the huge gesture said he Mclaughlan had asked her to marry him she would have said yes. Five months later, in April 2021 the pair had broken up.