Cow Appreciation Day: Amazing footage of a cow swimming at a Donegal beach

The video of a cow swimming at Bunbeg Beach in Co Donegal has gone viral on Twitter. 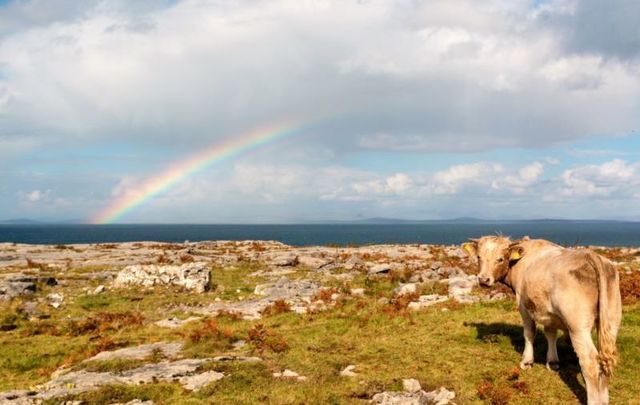 A cow in Co Donegal was in the "moooood" for a swim! Getty Images

Celebrate Cow Appreciation Day by enjoying this video of a cow taking a dip in the sea at Bunbeg Beach in Co Donegal, which quickly went viral on Twitter last year.

Irish woman Caoimhe O'Connell shared the amazing footage of the Irish swimming cow to her personal Twitter account on August 15, 2020 along with the caption, “So this just happened on Bunbeg beach."

So this just happened on Bunbeg beach. 🐮 pic.twitter.com/o4TPke6g13

At the time of publication, O'Connell's video has been viewed nearly 60,000 times her tweet has been liked more than 1,500 times.

In the video, both adults and children who were spending the afternoon on the Irish beach took great delight in the sighting. Donegal Daily notes, however, that "cows on beaches in Donegal are not an uncommon sight."

Soaking up what looked to be a stunning Irish summer day, the cow breaks into a gallop as it emerges from the waves.

In a later tweet, O'Connell said: "We just gave it space and it looked like it didn’t know what was happening, I’m guessing it got stranded on the wee islands when the tide came in."

She added: “Donegal - where cows emerge from the sea.”

One Twitter user noted that the swimming cow at Bunbeg may now be rivaling Ireland's most popular animal, Fungie the Dolphin, who lives in Dingle, Co Kerry:

Dingle has Fungi the dolphin, Bunbeg has upped the stakes with a mercow.

And in a distinctly Irish turn of events, the following day Caoimhe confirmed she knew the cow's owner:

Turned out to be my mate Cathal’s cow Magee! 😂 I met him this morning on the road and he still hasn’t got it!!

Have you ever had any amazing animal sightings in Ireland? Tell us about it in the comments, below!