The cutest video there ever was, filmed on an Irish farm. 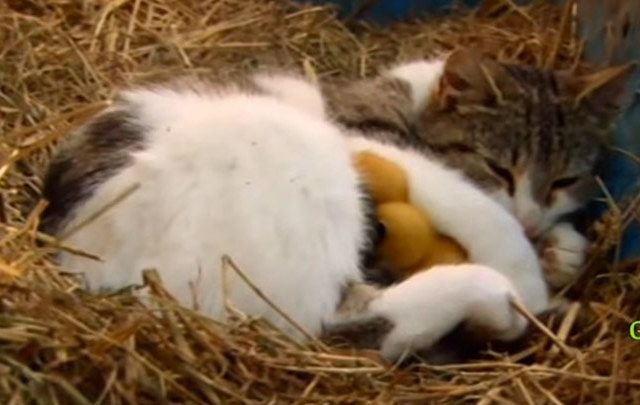 A cat and three ducklings developed a most special relationship on an Irish farm. YouTube

For #tbt (Throwback Thursday) we bring you the cutest and most surprising video there ever was, filmed on an Irish farm.

A little over a year ago in Clara, Co. Offaly, Ronan and Emma Lally were eagerly awaiting the arrival of some baby ducklings. One morning, they noticed that the eggs had hatched, but there were no ducklings in sight.

Fearing the worst – especially with a cat on the farm – they went looking for the ducks. They couldn’t believe what they found.

The cat, having given birth to a litter of kittens just before the ducklings hatched, had incorporated them into her own brood. Even more incredible – she was nursing them.

After a while, Ronan wanted to separate the unlikely family, fearful that the cat’s predatory instincts would kick in. But Emma, who works as a midwife, persuaded him that they had to remain together.

As the ducklings grew into ducks, they quickly outgrew both their kitten siblings and their cat mother. But they all remained good friends and were the subject of a BBC nature series on odd animal couples.