A heartbroken bride-to-be in Australia got revenge on her love-rat partner at the altar. 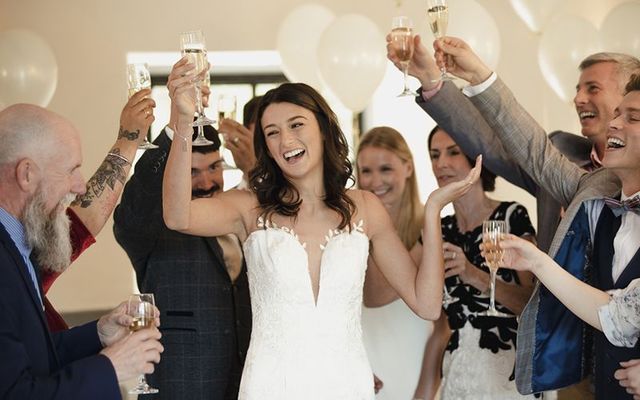 This bride showed that "hell hath no fury like a woman scorned" when she read out her cheating groom's texts at their wedding. IStock

Did you know July is an unlucky month to have a wedding? We didn't but we couldn't help but be reminded of this badass bride-to-be in Australia who got revenge on her love-rat partner at the altar.

As she prepared for her wedding the next morning, Casey recalls her phone suddenly lighting up with a stream of messages.

These weren't the usual 'good luck' or 'congratulations' texts though - the message displayed countless screenshots of exchanges between Casey's groom-to-be and an unknown woman.

The message asked her, "I wouldn’t marry him. Will you?”

In a personal essay penned for The Whimm in 2018, Casey described her shock, disgust, and heartbreak at seeing the conversations that had been going on behind her back.

She wrote, "She was the opposite of me. I’m blonde and fair, and this unknown woman had dark hair and olive skin. The texts were dated from months to only days before. My brain simply could not compute WTF was going on. There was no questioning the legitimacy of these messages. I just knew."

The texts were along the lines of:

“Your body is f------incredible. And shit do you know how to use it. I wish my GF had half the skills you do.”

“I miss you so much. I can’t stop thinking about L, S, F’ing you. I’ve never had this kind of connection before.”

Casey said that "every word was like a dagger in [my] heart." However, with mere hours 'til her 'dream' wedding, she couldn't bring herself to cancel without an explanation.

She told her bridesmaids who spent the night with her that she would go ahead with the big day, and out her fiancé Alex* for the cheating liar he was.

"I walked down the aisle with leaden feet, my dream dress now just a costume. As he saw my face he knew this was not an ecstatic woman on her big day, but he had no idea what was coming. I arrived at the front of the room, took a big breath and I faced our friends, our parents and I told them the truth about Alex."

"There will be no wedding today," Casey announced to the crowd. “It seems Alex is not who I thought he was."

She remembers Alex trying to grab her hands and stop her, but she preceded to read out every message as she "let her weeping eyes meet his".

"He had not one thing to say," she said. "He stalked out of the church with his best man trailing behind him. His family looked on, horrified."

“I love all of you and as horrible as this is I’m glad you all are here. There will not be a wedding reception today, but instead, there will be a celebration of honesty, finding true love and following your heart even when it hurts," she concluded.

She also added that the remainder of the day was "one hell of a party"!

Do you think she did the right thing? Let us know in the comments below.