A historic gem "Up Sráid Eoin - We Never Died a Winter Yet!" a short documentary that maps the preparation and history behind the Irish tradition. 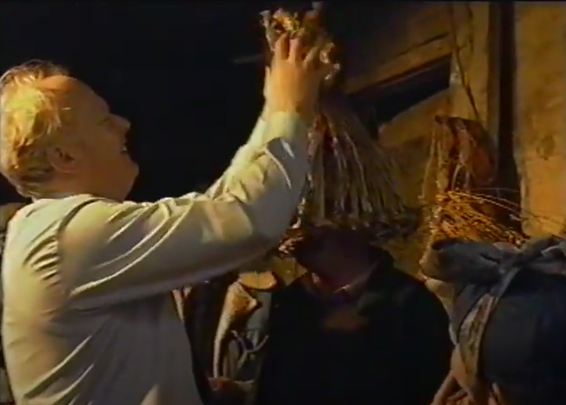 The Captain preparing a member of the group for the St. Stephen's Day, Hunting of the Wren. YouTube

One of Ireland's old traditions for Christmas, is the hunting of the Wren, where people went door to door dressed up. This 1992 documentary shows a local group in Kerry preparing and speaking about this fun St. Stephen's Day tradition.

"Up Sráid Eoin - We Never Died a Winter Yet!", a movie written and devised by Ríonach Uí Ógáin, in 1992, follows the Sráid Eoin Wren group one of the main groups in Dingle, County Kerry, as they prepare for St. Stephen's Day and the Hunting of the Wren.

The documentary was posted on YouTube by Maidhcí O Súilleabháin. He wrote: "Lá an Dreoilín or Wren Day, also known as Wren's Day, Day of the Wren, or Hunt the Wren Day), is celebrated on 26 December, St. Stephen's Day in a number of countries across Europe. The tradition consists of "hunting" a fake wren and putting it on top of a decorated pole.

"Then the crowds of mummers, or strawboys, celebrate the wren (also pronounced wran) by dressing up in masks, straw suits, and colorful motley clothing. They form music bands and parade through towns and villages. These crowds are sometimes called wrenboys."

The tradition of hunting the wren dates back to Penal Times in Ireland when a wren was believed to betray a band of Irish fighters as they attempted to ambush Norse soldiers in an Irish village.

The Irish locals had surrounded their rivals and were poised to ambush them when a herd of wrens pecked on their drums and awakened their sleeping adversaries.

The plot failed and the wren became known as "The Devil's bird."

On St. Stephens Day in Ireland, a procession takes place where a pole with a holly bush is carried from house to house and families dress up in old clothes and with blackened faces. In olden times, an actual wren would be killed and placed on top of the pole.

Crowds of people take to the roads around Ireland, wearing masks and straw clothing and generally accompanied by musicians. Today, a stuffed wren is used instead of a real-life bird.