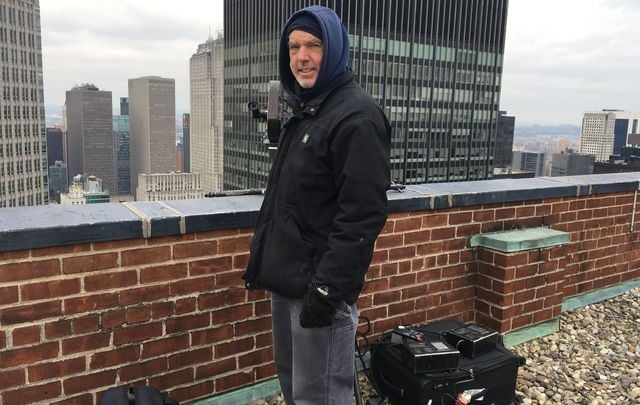 Not one for resting on his laurels, Marcus has started a new project which should last six-and-a-half years - filming the demolition and rebuilding of the JP Morgan headquarters in New York. He is pictured filming the JP Morgan building from across Park Avenue on a frigid January morning this year. New York Belfast

For film-maker and painter Robinson, who hails from East Belfast, is based on the 46th floor Three World Trade Center, one of the skyscrapers reshaping the Manhattan skyline as it rises from the ashes of the Twin Towers.

On 13 June, a 30-strong delegation from the Belfast Chamber of Commerce, in town for the annual New York-New Belfast conference, will get to hear first-hand about how Robinson has been recording the rebuilding of the World Trade Center in film and oils since 2006.

In 2014, the History Channel broadcast his epic tribute to the workers behind the rebirth of the World Trade Center while his mammoth paintings of the work in progress have been exhibited in Ireland, France, and the US.

Conference host Connla McCann says the Belfast delegation is enormously proud of Robinson. “Marcus has left his mark on New York in an indelible manner. He has proven the truth of the old maxim that if you can make it here, you can make it anywhere and it’s heartening to see his unique cinematic style being used to pay homage to the men and women who are transforming the Big Apple.”