Apple boss Tim Cook was in Ireland to accept an award from the IDA to mark the tech giant’s 40 years of operating in the country. 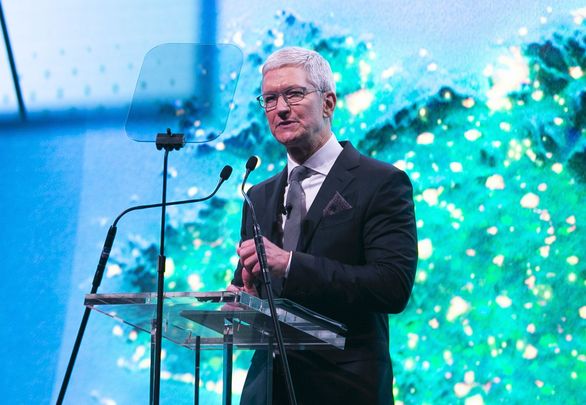 Apple boss Tim Cook was in Ireland on Monday to accept an award from the IDA to mark the tech giant’s 40 years of operating in the country.

Tim Cook, Apple boss, said that he looks forward to “another 40 years” of his company having its European headquarters at Hollyhill in Co. Cork.

Cook received the IDA’s inaugural special recognition award to mark Apple’s 40 years in Cork.  The company is the largest employer in the county with more than 6,000 employees, a fact that Taoiseach Leo Varadkar noted in his remarks about Apple.

“Only four years after it was founded, Apple opened a factory in Hollyhill in Cork, employing 60 people,” he said.

“Today, Apple is Cork’s largest employer with 6,000 people of over 100 different nationalities and is a global operation. During this period Ireland has become the tech capital of Europe. We succeeded by looking to the future, opening our country to trade and competition.”

Celebrating 40 years of Apple in Ireland with our remarkable and growing team at Hollyhill! Your hard work and dedication to our customers and the communities we serve reflects the best of what we stand for. Here’s to the next 40! 🇮🇪 pic.twitter.com/ADiRz3yoOP

Cook praised the relationship between his company and the Irish.

“I believe deeply that our most important work together is still ahead of us,” he said.

“I accept this award on Apple’s behalf and as a symbol of our unshakeable commitment to and investment in this place we have called home for 40 years, almost as long as Apple itself has existed.”

Cook didn’t remark about the 2016 €13 million tax judgment against Apple issued by the European Commission, which said the company owed Ireland that amount in unpaid back taxes.  The decision is being appealed by both Apple and the Irish government.

But during a question and answer session after the award presentation, Cook said he was in favor of a fair tax system being imposed for American companies with operations abroad.

"It's very complex to know how to tax a multinational," he said. "It's not like a small business that does all of their stuff generally in one country.

"A multinational might manufacture in one country, service in another, sell in another and do research and development in another. And so somebody has to decide how to apportion the profits and, therefore, the tax payments."

Any changes in tax law, he said, shouldn’t be “retrofitted.”

"This is where the issue comes in the commission. We believe that law should not be retrofitted, that the law is the law and the law can change going forward but it shouldn't change going backward.

"That is at the heart of the case if you just make it very simple. It is before the court now and we have great faith in the justice system.

"The [European] Commission has a different perspective on who we should pay.
"And the way that we look at it, and I believe it's the way Ireland looks at it as well, is that we have paid them per the law. We followed the law and paid them accordingly."

During his time in Ireland, Cook also traveled to Hollyhill to meet Apple’s workforce.