Ryanair boss admits families must pay to sit together on flights 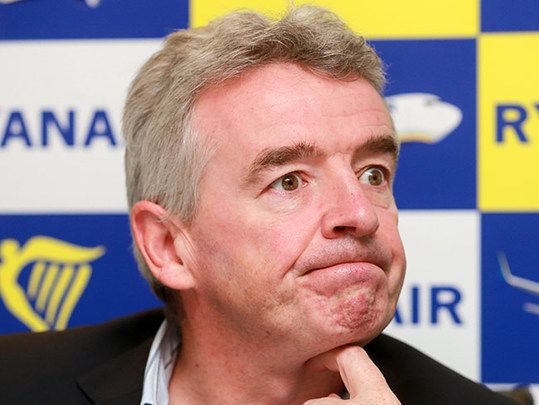 "Ryanair does not split up families on our flights, and their Chief Executive was talking about groups traveling, rather than families. Please find Ryanair’s statement below for inclusion.

“We require families (with kids under 12) to sit together. One adult is required to purchase a reserved seat for just £4 and we give all of the kids free of charge reserved seats to ensure that families are not and cannot be separated.”"

After denial after denial, the CEO of Irish budget airline Ryanair has admitted that families have to pay to sit together.

When questioned by a journalist from Liveline Michael O’Leary said the system wouldn’t stop groups and families from being split up.

“But it also isn't told, “do your best to split them up as far as they possibly can”,” he added.

When questioned further he admitted that unless a passenger pays to reserve their seating they are, “highly likely to be dispersed”.

Read More: Ryanair asks wheelchair user to walk up stairs, leaves her crying at the gate

He denied that people are being split up more frequently than in the past and attributed the grumbling to more people reserving their seats than in the past - leaving those who don’t with less choice. Roughly half of Ryanair passengers now reserve their seats, compared to 10% a decade ago.

Seats next to the window or the aisle are kept open for paying customers for as long as possible as, “that's where we will make money.”

“No question about it,” O’Leary continued. “That is a customer choice, if you don't want to pay the extra, don't pay the extra.”

The radio show fielded a call from a man who was split up from his wife and teenage daughter on a flight from Cork to Bordeaux and labeled the policy “ridiculous”.

Customer upset did little to move O’Leary, now reputedly a billionaire, who said it was, “the responsibility of the adult who booked the flight.”

“We haven't changed our policy,” he berated customers. “If you're not happy to pay €2 for a seat, stop complaining and whingeing. If you want to select a seat, pay €2.

“People are whining and whingeing – but you can't sit where you want. Sorry, you can't.”