Trump a positive for Irish companies in US, believes Enterprise Ireland CEO

Irish companies could be in prime position to take advantage of President Trump’s desire to create as many US-based jobs as possible. 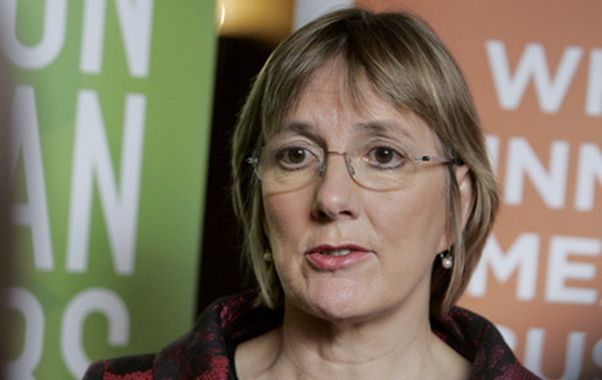 Despite some fears expressed in Ireland about the economic impact of Donald Trump’s Presidency, the CEO of Enterprise Ireland Julie Sinnamon believes that the “America First” job creation policies of the 45th President are a positive for Irish companies already operating within or hoping to expand into the US market.

“I think it's good for Irish companies,” Sinnamon told IrishCentral in an interview held at the Enterprise Ireland offices in New York on Inauguration Day, January 20.

“What happens on the trade front it's too early to say, but I do believe that there's a great fit between the product we have and what is being demanded in this market. We've great technology companies and we really need to make sure that they're maximizing their position here.”

On the impact of Brexit, Sinnamon says Irish companies need to prepare for the worst case scenario and redirect their energy toward the US market in the event of harsh Brexit terms.

“In fact, the reaction from many of the companies in Ireland to the UK [leaving the EU] is that there is a really open market in the US in that people here like dealing with Irish people,” she said.

“They see them as having really good quality products. It's a very accessible market and people should look west as opposed to looking east.”

Since IrishCentral spoke with Sinnamon, President Trump has met with various US business leaders to discuss taxes and regulations and how these can be altered to ensure future job creation, relocation of the production bases abroad back to the US, and a commitment to staying within the country in the future. At the meeting on Monday, January 23, were Michael Dell of Dell Technologies and Alex Grosky of Johnson and Johnson, both companies have extensive operations in Ireland and employ several thousand people between them.

Trump also warned the business leaders of the costs his administration would impose on those companies that do not relocate to the US. This threat has caused worry for many in Ireland who fear that American multinationals may abandon Ireland.

IDA Ireland, which is the government agency responsible for luring foreign direct investment [FDI] to Ireland, is bracing for a drastic cut in America's corporation tax to a level that will challenge Ireland's 12.5 percent rate.

Equally, Enterprise Ireland is readying itself for Brexit and on the lookout for opportunities in the US that could possibly lessen the dependence of Irish companies on the UK market.

“There are more people employed in those [Irish] companies than there are in multinationals companies,” she adds, “which actually doesn't always get known within the companies. The key thing is that those two groups of companies [FDI and native] working together both in Ireland and globally are really where Ireland will get the maximum impact.”

Enterprise Ireland has just unveiled its new four-year plan, which is built around Ireland and Irish companies' responses to Brexit.

“What we have to do now is to broaden that footprint outside of the UK,” Sinnamon explains

“The target is to grow exports outside the UK for this period of four years by 50%. That's really ambitious, but it's about continuing to further decrease the dependence on the UK market.

“We're not going to walk away from the UK market,” she added. “We still intend to maintain our position there,. but that requires us to be more innovative and more competitive within the UK and to go after different opportunities. There are still big spending programs going on in the UK. Some companies might be focusing on the south east of England whereas they should be looking at Scotland and the north of England so it's about looking at every sector and company and what their needs are and what they need to do.”

For Sinnamon, the US could be one of the solutions in the future, however.

“We have to continue to get success in the US market,” she believes.

Will be meeting at 9:00 with top automobile executives concerning jobs in America. I want new plants to be built here for cars sold here!

Will be meeting at 9:00 with top automobile executives concerning jobs in America. I want new plants to be built here for cars sold here!

Yet it’s not just Irish charm that will take them there. While Sinnamon agrees that the Irish are thought of as nice people, she thinks nice can only get you so far and that the quality of Irish companies is what will stand to the country in the next few uncertain months and years.

“I think a lot of these companies are operating in towns and villages in Ireland and people don't appreciate the fantastic companies that they are,” she declares.

“For example, Combilift [a company based in Co. Monaghan] … they employ hundreds of people and are exporting to 75 countries around the world on a massive scale and are really successful. They most enjoyable part of my job is doing trade missions with these Irish companies with fantastic products that are competing against the strongest competition in the world and seeing that they're able to grow their business because of the quality of the products.

“I always say people don't buy Irish products because we're nice people even though we are.  People being nice will take you so far but you need to have excellent products and services and the investment in R&D [research and development] is key. That's something that we want more of but that has really been a big driver of that success.”

Could Donald J. Trump's presidency be of benefit to the Irish economy? Let us know your thoughts in the comments section, below.