Over the past five years, the Comptroller has made two groundbreaking investments in equity funds which focus on funding startups in Northern Ireland. 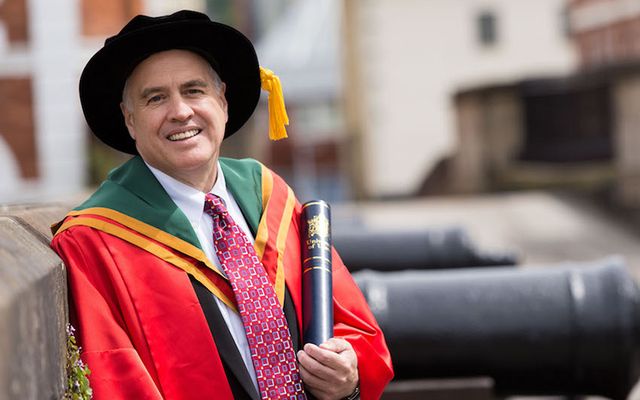 New York State Comptroller Tom DiNapoli told a University of Ulster graduation ceremony that his investments in the North of Ireland are motivated by a ‘double bottom line strategy’ to ensure a return for the state’s one million-plus pension fund members and retirees while doing good within Northern Ireland itself.

The Comptroller, who is the sole trustee of New York State’s $192bn pension fund, was addressing students and faculty in Derry after receiving an honorary doctorate from the university.

"It is a privilege to be back in this beautiful city,” he said. "After my first visit to Northern Ireland nine years ago, I observed the contrast between Belfast and Londonderry: Belfast hums, but Derry sings. It’s wonderful to see that the beauty of this city is still singing like a sweet, unforgettable song.

“My first visit came at the joint invitation of Ian Paisley and Martin McGuinness. They traveled to New York to engage my interest in investment opportunities in Northern Ireland. The ministers’ message was clear: With the peace process underway and the troubles in the past, Northern Ireland was a place of resilience, renewed optimism and hope. And investment capital from New York would help to ensure economic growth for all communities.”

Over the past five years, the Comptroller has made two groundbreaking investments in equity funds which focus on funding startups in Northern Ireland. The State Pension Fund invested $15m in Crescent Capital of Belfast, the biggest-ever single investment in an equity fund in the North, and more recently, New York made a $7m investment in the Cork-headquartered fund Kernel Capital.

However, New York State also holds billions of dollars of stock in companies which trade in Northern Ireland and it’s this leverage which has enabled the Comptroller to promote the MacBride Principles on Fair Employment, principles which dictate that state funds can only go to companies in the North which don’t discriminate in hiring practices.

"We can all agree that one of the strongest ways to break down divisions and promote harmony is through opportunity and jobs,” Comptroller DiNapoli told the standing room-only ceremony in Derry’s Millennium Forum.

"That is the path to a shared future of equals, for the greater good of all.”

He also gave an indication that further investments could be made if political progress throws up more business opportunities.

"It is the potential in each of you,” he told the newly-minted graduates, "that gives investors like me the confidence that Northern Ireland can continue the process of peace and prosperity. The history and struggle of Northern Ireland is a powerful example of what can be accomplished when adversaries with long held, seemingly intractable positions commit to finding common ground.

“You do your part to be a beacon of hope and you can count on the people of New York to continue to be a partner with you on the path to equal opportunity and sustained prosperity.”

Dr DiNapoli travels to Dublin Wednesday through Thursday before heading back North on Friday for meetings with civil rights groups, business leaders, and politicians.