Diageo announced plans to develop an urban center at the iconic brewery in 2017. 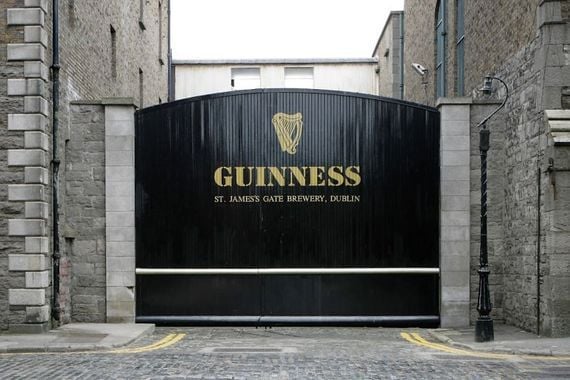 The Guinness Brewery in Dublin spans over 50 acres.

Diageo announced plans in 2017 to develop 12.6 acres of the iconic complex at St. James's Gate into an urban center complete with housing, offices, and shops called the "Guinness Quarter."

The company said Thursday that it intends to develop the Guinness Quarter as Dublin's first zero-carbon district. meaning that existing buildings at the site will be reused while Ballymore and Diageo will examine the possibility of installing renewable energy sources at the site.

In addition to residential units and office space, the site will also include several public spaces.

The project, which will develop 12.6 acres of the 50-acre Guinness Brewery, has previously been slated to cost €1 billion, but Diageo noted that the overall cost of the development is still unknown.

Both Diageo and Ballymore will work together to create a shared vision for the site that will "preserve the heritage assets and create a new urban area that will open up the historic St James’s Gate site."

Diageo and @ballymore will develop a masterplan for the Guinness Quarter that will preserve the heritage assets and create an inspiring urban neighbourhood that will open up the historic St James’s Gate site to the people of Dublin and beyond. #GuinnessQuarter pic.twitter.com/6QYYVDMeKX

Ballymore was selected after a rigorous selection process since Diageo first announced the project in 2017, according to the drinks company.

The Irish Times reports that the Irish property developer beat off interest from US multinational firm Hines and London-based U&I to win the contract.

Diageo said in a statement that it would be engaging with the local community to develop the area with the interests of the community in mind.

"Extensive engagement activity with the local community and other stakeholders will continue in the time ahead as Diageo and Ballymore develop a masterplan for the Guinness Quarter ahead of a planning application."

Meanwhile, Oliver Loomes, Managing Director of Diageo Ireland, said that the development at the St. James's Gate site would form "a fabric of the city for generations to come."

Loomes also said that Diageo would continue to work with the Iveagh Trust, a social housing provider in Dublin, as a partner in the project.

Sean Mulryan, chairman and chief executive of Ballymore, said that the company was "truly honored" to be selected by Diageo to work on the Guinness Quarter.

"With 40 years experience in delivering complex urban regeneration sites, in city center locations across Europe, we are confident we have the team to deliver," Mulryan said.