The Poetry of Yeats Country – Why you must visit now!

The Nobel Prize-winning Irish poet, William Butler Yeats’s childhood summers spent with relatives in Sligo had a formative influence on the poet for the remainder of his life. 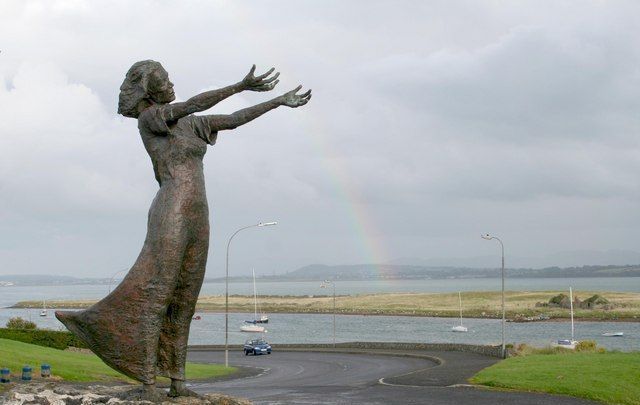 The Nobel Prize-winning Irish poet, William Butler Yeats’s childhood summers spent with relatives in Sligo had a formative influence on the poet for the remainder of his life.

The otherworldliness of the countryside, combined with local folktales intermingled with his own imagination to create a Tir na n’Og of the heart. To explore this country, from Ben Bulben to Knocknarea, from Drumcliffe Churchyard to the Glencar Waterfall creates a personal nexus, outside of time and space, in which the spirit of the writer and mind of the traveler can intermingle and co-exist for a brief interval.

Down Yonder is a lovely bed and breakfast in Rosses Point, a short thirteen-minute drive west and north of Sligo town. Looking west from the top of the road, reveals the flat marshland and beyond the wild swells of the Atlantic.   Out the back garden, you can view flat-topped Ben Bulben that dominates the landscape for miles around.  I had traveled from Dundalk to Sligo to dip my toes into the Atlantic Ocean and to pay my respects to Ireland’s greatest poet of the twentieth century.

Read more: Remembering the genius of WB Yeats on the anniversary of his death

- From “The Stolen Child”

Ben Bulben view from Down Yonder

Eavan O’Hara is the perfect hostess, making guests feel welcome and appreciated, yet never intruding on one’s privacy.  The rooms are extremely well-appointed.  The beds are large and sumptuous by Irish standards, and, were it not for the natural and literary life beckoning outside, one could well spend the whole day in bed staring out the window at magnificent Ben Bulben whose visage changes by the hour depending on the weather.

I arrived at the bed and breakfast in the late afternoon and settled in.  I was hungry and thirsty and asked the hostess for a casual place to dine, not too far of a walk.

A little jaunt downhill brought me right into the village of Rosses Point overlooking Sligo Bay and the Atlantic. Harry’s Bar and Gastropub is a character pub with a nautical theme, maritime memorabilia and chotchkies, a decent grill menu with a nice variety of meats, veg and seafood.

I settled on a burger and chips.  Nicely done, with a little rocket salad.  And, naturally, a pint.  They have a number of craft beers and the Guinness is well-poured.  The bartender was a young Aussie fellow.  Just been on the job a couple of weeks.  Genuinely friendly and knowledgeable.

After dinner, I adjourned into the restaurant proper. There are aquariums everywhere and even a well that serves as a table!  I got chatting with a couple of the locals only to learn that there was a table quiz that evening and would I like to join their team? Who wouldn’t? We didn’t win the quiz night, but we did manage to work our way through a few pints and some wonderful conversation.  Walking up the hill in the rain with my new-found friends was a prize I’ll always treasure.

The morning dawned dull and gray and drizzly but the breakfast in the dining room certainly dispelled any gloom.  The coffee was delicious and the full Irish breakfast:  white pudding, black pudding, rashers, sausage, eggs, and tomato was certainly substantial and would stand in for lunch.  There was a wonderful side table with local preserves and yogurt, cereal and fruit.  T

he company was delightful and the host ensured that proper introductions were made. It was more like a family breakfast than a meal with strangers.  The conversation ranged from the Wild Atlantic Way, friends and family abroad and, of course, Yeats Country and all that was on offer.

After breakfast, I browsed through some brochures in the front lounge.  I decided, given the weather, a trip to a cemetery was in keeping with the layers of cloud and low-hanging clouds.

In Drumcliff churchyard Yeats is laid,

An ancestor was rector there

Long years ago; a church stands near,

By the road an ancient Cross.

No marble, no conventional phrase,

On limestone quarried near the spot

By his command these words are cut:

- From "Under Ben Bulben"

William Butler Yeats and his wife George are buried on the grounds of St Columba’s Parish Church. The church was founded by Columba (St. Columkille) in the year 574 on land donated to the church.

There are the remains of a medieval round tower, whose top has been blown off, probably by ancient lightning and a beautiful, ornate high cross, embellished like the Book of Kells with knots and spirals and human and animal forms.

Like the high crosses at Monasterboice in County Louth, this beautiful example tells a number of Bible stories, including Daniel in the Lion’s Den.  The grave itself is to the left of the church door (which is decorated with a pair of beautiful swans, reminiscent of Yeats’s poem, "The Wild Swans at Coole." Yeats’s great-grandfather was a rector at the church.

“A little girl who was at service in the village in Grange, close under the seaward slopes of Ben Bulben, suddenly disappeared one night about three years ago. There was at once great excitement in the neighbourhood, because it was rumoured that the faeries had taken her.”

Ben Bulben is a table mountain unique in Ireland, a remnant of glaciated Carboniferous-age shales and a part of the Dartry Mountain Range.  Ben Bulben is so often viewed from a distance, particularly from the coast, that it’s iconic characteristic shape becomes imprinted on the mind, but there is a lovely walk beneath the cliffs and up close the mountain is monolithic and can easily overwhelm the senses.

The North face is formidable, but a gentle climb is easily accessible from the south.

Ben Bulben is associated with many stories and myths, including the voyages of Fionn Mac Cumhail, the story of Diarmuid and Grainne and the tale of St. Columba and the battle over the ownership of a gospel. St. Columba allegedly made a secret copy of a gospel owned by The Abbot Finian.  When the ownership of the copy was contested, the High King himself ruled and declared, “to every cow her calf, to every book its copy” establishing the first legal precedent for intellectual property.

This did not sit well with Columba who declared war over the dispute, a battle which was fought on the slopes of Ben Bulben and cost 3,000 lives.  St. Columba was so distraught at the slaughter that he exiled himself on the Isle of Iona off the coast of what is now Scotland and where some scholars claim the illustrious Book of Kells was written and illuminated.

- From “Red Hanrahan’s Song About Ireland”

A cairn of stones at the top of Knocknarea marks the final resting place of Yeats's Queen Maeve, warrior Queen of Connacht and principal character of the Táin (the Cattle Raid of Cooley).

Throughout her life, Maeve had many lovers and husbands but there was never any doubt as to who was in charge.  At the foot of the hill, the path is wet and extremely muddy, sure cause for a soaker in spite of the hiking boots on my feet.

It is a steep walk up to the top, but I was rewarded with a beautiful panorama, the flats of the Rosses below and to the south, Strandhill, home to surfers and the Voya Seaweed Baths.  Seaweed baths are an age-old tradition and if you’ve never experienced one, it is quite an experience.  The steaming hot mess of Irish kelp and hot water is surprisingly simultaneously relaxing and rejuvenating.  Not to be missed.

- From “The Stolen Child”

Last day and farewell to Down Yonder and the Rosses but on the journey east and homeward bound, a little side trip to the Glencar Waterfall.

The Glencar Waterfall is located just across the Sligo border in County Leitrim.  Though not a waterfall on the scale of Niagara, this picturesque beauty seems to speak volumes about the singular beauty of Ireland.  It is the kind of place where you can imagine fairies dancing, the water spraying downward, bubbling and gurgling and telling wild tales of the nearby woodlands.

It is a place of repose and the kind of natural habitat that could draw you in and never let you go.  The kind of spirit that Yeats conveys so well in his poetry and that had such a dramatic effect on his life and his work and that leaves us breathless and wanting more. Having only skimmed the surface of this country so beloved by this great poet, I am sure I will be back for another draught before long.

More details, room rates or reservations for Down Yonder can be found here or you can call +353 89 210 3639 or email info@downyonder.ie.